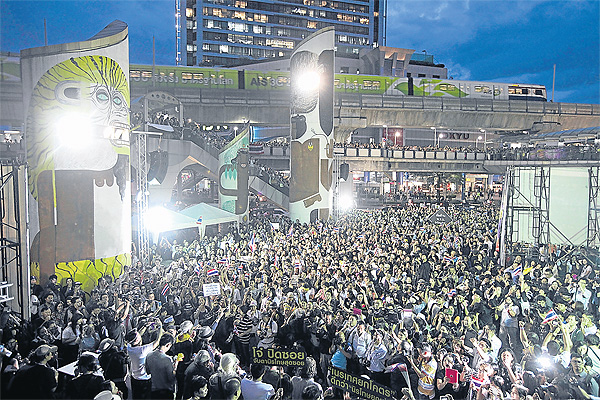 Social media users and a group calling themselves a ‘network of artists fighting for democracy’ converge on the Bangkok Art and Culture Centre to oppose the blanket amnesty bill yesterday. PATIPAT JANTHONG

The move came as the Senate on Friday failed to reach a quorum and was forced to postpone a sitting supposedly to reject the bill until Monday.

The red-shirt United Front for Democracy against Dictatorship's (UDD) decision to organise rallies of their own across the country also followed reports that some anti-government protest groups have expanded their aim from simply halting the bill to ousting the Yingluck administration.

Deputy Commerce Minister Nattawut Saikuar, a UDD core leader, on Friday said red shirts will rally at 4pm Sunday at the area behind SCG Muangthong United football stadium. However, he said the demonstrators will not march to other locations.

As well as tomorrow's Bangkok gathering, the UDD will organise more demonstrations in other provinces to mobilise support for the government and its bill.

The UDD plans rallies in Khon Kaen province on Monday, in Chiang Mai on Tuesday, in Samut Prakan on Wednesday, in Chon Buri on Thursday and in Udon Thani on Friday.

It also organised a gathering yesterday to oppose anti-government protesters and the Democrats at the Imperial World Lat Phrao department store in the capital.

"Yingluck is preparing to confront people and does not care about the public at all. Yingluck is mounting a challenge and showing that as the government and the prime minister she has the power to bring more people than the [anti-government] demonstrators," Mr Suthep said on the stage at Ratchadamnoen Avenue last night.

He urged more people to join his anti-government protest so they would outnumber the red shirts.

Bangkok Post reporters on the scene put the number at 20,000. 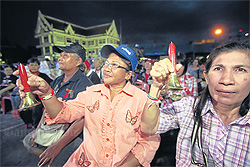 United Front for Democracy against Dictatorship members ring bells to show their support for the amnesty bill during a gathering at Samut Prakan provincial hall yesterday. The red shirts are using bells to counter the whistles used by bill opponents. PANUMAS SANGUANWONG

At the other anti-bill protest at Makkhawan Rangsan Bridge, Nititorn Lamlua, adviser to the Network of Students and People for Reform of Thailand, said on stage that his group would continue to rally even if the Senate rejects the amnesty bill on Monday.

"Our fight goes beyond the issue of the blanket amnesty. Now we are driving out the Thaksin [Shinawatra]-controlled government," he said.

But key UDD leaders took turns at Imperial World Lat Phrao to announce they were ready to gather crowds to protect the government.

Red-shirt idol Arisman Pongruangrong took to the stage and called for supporters to "protect democracy".

"If you do not stop, my group will stop you," Mr Arisman said, directing his comments at the rival protesters.

He reminded them that Ms Yingluck has announced that the government would not revive the controversial amnesty bill if the Senate rejects it and the Pheu Thai Party has agreed to withdraw all amnesty and unity bills.

Pheu Thai list-MP and red-shirt leader Cherdchai Tantisirin said if the anti-government protests grew, a million red shirts would storm into Bangkok to support the government.

But Suranand Vejjajiva, secretary-general to the prime minister, insisted all red-shirt rallies would be peaceful.

He said there had been attempts to overthrow the government and democratic rule and the government would enforce laws to effectively cope with the people behind these moves.

UDD chairwoman Tida Tawornseth said yesterday that although the Pheu Thai Party had upset some members of the red-shirt movement, they had to put their disappointment to one side as the government was facing a bigger problem.

Ms Tida said she wanted the government to quickly ask the courts to free jailed red shirts on bail.

"I don't know how much the government can help because it must save itself first. I do not know if it will survive because the tide is so strong," Ms Tida said.

A boycott by some senators forced the urgently-called meeting of the Upper House to deliberate the amnesty bill yesterday to postpone it to Monday after it failed to make a quorum.

It required the attendance of 75 of the 149-member Upper House but only 68 senators registered to attend.

Senate Speaker Nikom Wairatpanich finally decided to postpone the meeting to Monday after talking to the Group of 40 Senators who refused to attend.

Pichet Sunthornpipit, a member of the Group of 40 Senators, said yesterday's session was called at short notice and the group was not ready for it.

While the Senate speaker waited for a quorum, some senators took turns arguing over whether the first reading of the bill should be brought forward. Some members of the Upper House said it was an attempt to help the government.

Wicharn Sirichaiekkawat, an appointed senator, argued in favour of an early debate. "If the session can't take place, it means some people don't want the country to remain peaceful. They want to bring down the government," he said.

Phuket Senator Thanyaratsama Atchariyachai said an early debate would help defuse tensions. He said it was difficult to tell what would happen if the protests continue, citing the 2008 airport seizures by the People's Alliance for Democracy as an example.

The postponement of the debate drew criticism from some senators who voiced concerns that the protests might get out of hand in the next few days.

Earlier, the Group of 40 Senators issued a statement calling on Ms Yingluck to dissolve the House and call a snap election.

Senator Prasert Chitpong, from Songkhla, said a House dissolution will satisfy the anti-amnesty protesters because the bill would automatically be dropped.

He said a majority in the House had abused its mandate by passing the blanket bill. The House should be dissolved to return the mandate to voters.

Sen Prasert said the Senate delay would only exacerbate tensions over the weekend because protest leaders want to keep the momentum of their rallies going until Monday when the International Court of Justice rules on the Preah Vihear territorial dispute.

He said these senators are working with the Democrat Party and others to box the government into a tight corner and facilitate political changes.

Mr Suranand said the Group of 40 Senators' boycott of yesterday's vote was intended to ensure the current protests last until Monday.

Combining the amnesty bill with the Preah Vihear dispute would be disastrous for the country, the prime minister's secretary-general said.