Chamlong Srimuang can't stay away from the anti-amnesty, anti-government rallies - The widow of Gen Romklao Tuwatham raises a poignant point: who to reconcile with? - Yaowapa Wongsawat is using her power to quell party discord, but Pheu Thai still sits on a powder keg

After months of disengagement from the rally scene, Chamlong Srimuang, the former co-leader of the People's Alliance for Democracy (PAD), is back in the picture. 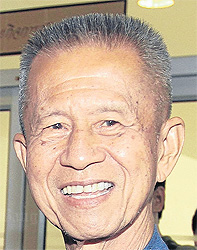 To a lot of fellow yellow shirts, Maj Gen Chamlong is the icon of public resistance to unjust government and the trailblazer of modern era street demonstrations.

However, Maj Gen Chamlong has faded into the background with the current anti-amnesty bill rallies.

He retreated from an active protest role in August when he and other PAD leaders announced they had stepped down as the guiding lights of the movement so as not to defy their bail conditions.

The leaders were charged with terrorism in connection with the seizure of the Suvarnabhumi and Don Mueang airports in late 2008 and are out on bail.

It is widely accepted that Maj Gen Chamlong, the former leader of the Palang Dharma Party, attracted a large following at various rallies because he practices frugality and is known for his tenacity to principle.

During protracted PAD protests against ousted premier Thaksin Shinawatra in the past, Maj Gen Chamlong had a significant role to play that gave a financial boost to ASTV, the alliance's broadcasting arm.

Maj Gen Chamlong's closely-aligned Kong Thap Dharma (Dharma Army) group has been a pillar of support for the People's Democratic Force to Overthrow Thaksinism (Pefot), formerly based at Lumpini Park.

It was at the Lumpini gathering last weekend that Maj Gen Chamlong re-emerged on stage. He and a number of individuals previously attached to the PAD made their appearance at the Pefot rally before leading the protesters on foot to join those at the Uruphong protest.

Maj Gen Chamlong's presence at the forefront of the march did much to rouse the protesters at the Uruphong and Lumpini gatherings. The Lumpini protest has since been integrated into the Uruphong demonstration.

The march to the Uruphong rally site was totally unexpected by rally goers.

The Uruphong rally, and the one organised by the Democrat Party, are being held in parallel, and they are united in their goal to push for the revocation of the amnesty bill. However, the Uruphong protest organisers are insisting they will not stop at the amnesty bill but press further for the ultimate downfall of the government.

Maj Gen Chamlong's return to the rally spotlight has reminded some political observers of his active leadership in the campaign against Gen Suchinda Kraprayoon at the height of Black May 1992 which saw a violent and lethal military crackdown on peaceful demonstrators.

A question so far unanswered

A question raised by a woman still in mourning over her husband's death in the bloody street clashes in Bangkok three years ago is resonating throughout the anti-government protests. It remains unanswered.

''With all this talk about reconciliation, who should I reconcile with?'' says Nicha Hiranburana Tuwatham, the widow of Gen Romklao, an army officer killed in the clashes between the soldiers and the red shirts at Kok Wua Intersection in the 2010 unrest.

As Mrs Nicha understands it, the bedrock of reconciliation lies in forgiveness, which is a two-way street. It is about forgiving and being forgiven. 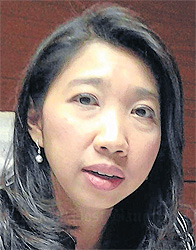 No one has been caught, let alone convicted, for her husband's death.

She feels due process of justice has to be served before all sides can give reconciliation a chance, which is something Prime Minister Yingluck Shinawatra struggles to comprehend, Mrs Nicha says.

Even if the bitterly-controversial amnesty bill, which has ignited waves of opposition around the country, somehow scrapes through parliament, there is no guarantee that peace can be restored, the widow says.

Mrs Nicha, 45, is one of the victims of the political violence entitled to collect a 7.5-million-baht cheque as compensation. However, she has refused to pick up the payment until the investigation into her husband's killing is concluded and the culprit put on trial.

Mrs Nicha feels justice has come up short, not only for the dead but also for the living. A senior C-8 official at the Prime Minister's Office, she has been through some tough times at work since she lost her husband.

Following the 2010 street violence, she mounted a personal campaign to seek justice for her husband.

She appealed to relevant agencies to conduct a fact-finding probe into the ''men in black'' she believed pulled the triggers during the Kok Wua clash that killed Gen Romklao who was leading the soldiers in the confrontation with the red-shirt protesters.

Certain sectors of the government deemed her campaign as disrespectful, and being a civil servant, she was reprimanded by a senior politician in power about her activism.

Since 2010, Mrs Nicha's career has stagnated. She has missed out on promotions.

She recently took to the stage at the rally near Samsen railway station organised by the Democrat Party. The rally has since moved from Samsen to the Democracy Monument.

According to a source close to her, Mrs Nicha was asked by sympathisers why she decided to appear at the rally. Apart from voicing her resistance to the amnesty bill, she said she was appalled by the perceived rush to pass the highly contentious legislation in its third reading in the wee hours of the morning.

She also wanted to be among the people who have given her emotional support to overcome the odds against her since the death of her husband.

The source said Mrs Nicha was also in awe of the solidarity of the people taking part in the anti-amnesty protests who are united by patriotism and their love for the monarchy.

Time for some serious reflection

The Pheu Thai Party has its back to the wall trying to push through one of the country's most bitterly contested draft laws.

Barely a week ago the ruling party's de facto leader vowed from exile to go all the way, at whatever cost, to have the wholesale amnesty speedily passed through the House of Representatives.

And pass it did. On Oct 31, in record time, it cleared its second and third readings in mere hours. The House called it a wrap at the ungodly hour of 4.25am, when even the bill's fiercest critics were sound asleep.

However, Pheu Thai could not have imagined the intensity of the backlash that such a rushed move would trigger. 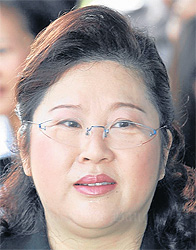 Yaowapa: ‘Can’t burn the house down’

The government had obviously underestimated the extent of public resistance to the bill. Many feel it is tailored for ousted premier Thaksin Shinawatra, and are angered by the unusual speed with which it raced through the House. The anger surrounding the anti-amnesty bill sparked the Samsen rally, organised by the Democrat Party, and gave pockets of protests at Uruphong Intersection and Lumphini Park a shot in the arm.

At the same time, public opposition to the bill spread like wildfire, much to the chagrin of Pheu Thai.

Observers say Pheu Thai core figures have no one but themselves to blame for under-assessing the situation. Even with Thaksin's two sisters firmly in seats of power, they overestimated the political control the party exerts over parliament.

According to one party source, she is believed to be the reason Pheu Thai House MPs voted through the bill in its second and third readings so quickly.

Ms Yaowapa reigns supreme in the Pheu Thai Party. So much so that even House Speaker Somsak Kiatsuranon and his deputies pay heed to whatever she says, the source said.

Earlier on, Mr Somsak and his deputies had planned on allowing the opposition ample time to debate the bill. They guessed the House session for the bill could be conducted over two days.

However, along came Ms Yaowapa's instruction that the bill had to be settled ''lock, stock and barrel'' within the shortest possible time.

While public opposition to the proposed amnesty has swept the country, the bill looks like it will eventually be dropped.

In the meantime, the bill has divided the red shirts, the government's staunchest ally, down the middle. Worachai Hema, the Pheu Thai MP and a red-shirt core member, may have been baffled to find the legislation he sponsored had been modified during House scrutiny almost beyond recognition.

Some well-known red shirts have been highly critical of the bill which they slam for seeking to exonerate the parties responsible for the deaths of red-shirt protesters in the 2010 political violence.

But their reaction to the party's move has cost some of them their talk shows on the AsiaUpdate TV channel. Others have had their stints as vice ministers ''discontinued''.

''The big boss doesn't consider the red shirts to be his comrades in arms any more. He thinks we're here only to take orders,'' one red-shirt figure said.

A source in the Pheu Thai Party said Ms Yaowapa has barred red-shirt members of the party from shooting a broadside at the big boss over his miscalculation of the repercussions brought on by the bill. ''People can be upset but they can't burn the house down,'' she was quoted as saying by the source.