312 MPs, senators reject Constitution Court's decision before it's made

More than 300 lawmakers from both houses of parliament came out in one voice on Tuesday to attack the Constitution Court on the eve of its ruling on a proposed constitutional charter amendment that would change the composition of the Senate into a fully-elected chamber. 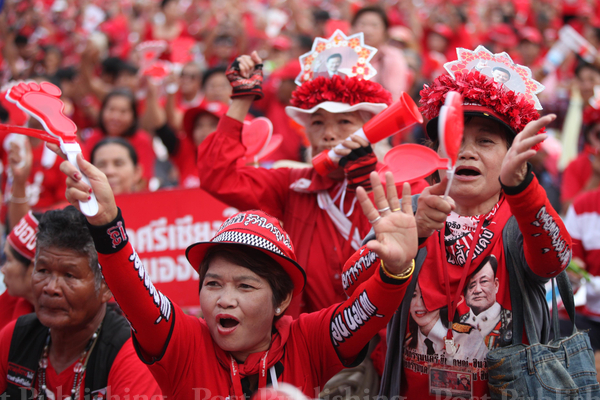 Red-shirt supporters move into Rajamangala Stadium on Tuesday to get the best places, hours ahead of the rally against the Constitution Court. (Photo by Taweechai Tawatpakorn)

They said the court had overstepped the boundary by deciding to take up for consideration the petitions aimed at derailing the amendment, a decision they deemed interference in the legislative branch of government.

The move by 312 MPs and senators came as red-shirt members began converging at Rajamangala Stadium to air their opposition to the court.

House Speaker Somsak Kiatsuranond and his deputies - Charoen Chankomol and Wisut Chainurana - led a campaign against the court at parliament. They confirmed their stance that the court had no authority to consider the petitions.

They renewed their stand on this issue after 30 legislators representing the 312 lawmakers held a separate press conference at the same place to make their position public. 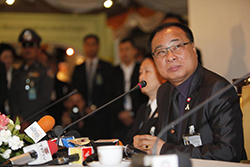 House Speaker Somsak Kiatsuranond holds a press conference in parliament on Tuesday to renew his position that the Constitution Court has overstepped its power, interfering with the legislature, by considering the legality of a constitutional charter amendment. (Photo by Apichart Jinakul)

Krit Arthitkaew, a senator for Kamphaeng Phet, and Amnuay Khlangpa, a Pheu Thai Party MP for Lop Buri, spoke out in the same tone as the lower house speakers.

They rejected the court's decision to consider the fate of the amendment.

"Personally, we respect the judges of the Constitution Court but we are confident that we have performed our duty in line with the constitution,'' Mr Krit said.

By its decision to take up the petitions, the court had intruded on the work of the legislative branch, he said, and expressed concern that it could set a precedent for other legislation that comes before the parliament in the future.

Mr Krit said the 312 lawmakers will not follow any order handed down by the court, but stopped short of saying whether they would begin a campaign to impeach the judges.

Mr Amnuay said the court was acting in violation of the constitution, while MPs and senators had worked within the guidelines of the charter on this issue.

The amendment has been endorsed by a majority of both the House and the Senate. It was sent to His Majesty the King for approval 50 days ago. His Majesty has 90 days to make a decision.

Four petitions have been filed with the court since the amendment was passed by the parliament.

The petitioners, two Democrat Party MPs and two senators, allege that the amendment would undermine the constitutional monarchy, and was approved by wrong procedure.

The court could rule in favour of the petitioners, or against them, analysts are not certain of the outcome.

Whatever the decison handed down by the court, the constitution says that the ruling is "binding''.

''The decision of the Constitutional Court shall be deemed final and binding on the National Assembly, Council of Ministers, Courts and other State organs,'' Section 216 states.

Red-shirt members from  provinces outside Bangkok have been arriving at Rajamangala Stadium since Tuesday morning and were expected to fill the stadium on Tuesday night.

Leaders of the United Front for Democracy against Dictatorship Tida Tawornseth and Jatuporn Prompan on Monday also declared the court had no power to consider the amendment.