Prime Minister Yingluck Shinawatra has conceded she never attended meetings of the National Rice Policy Committee although she is the chairwoman. 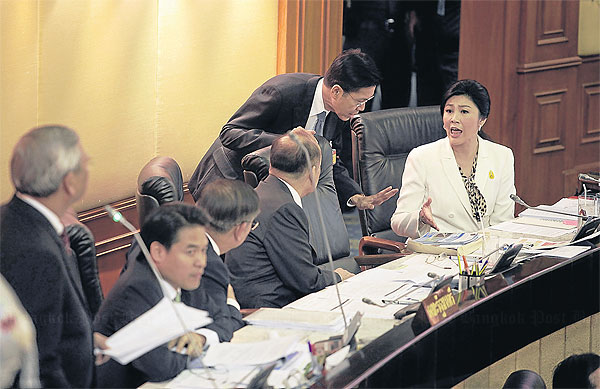 Prime Minister Yingluck Shinawatra talks to cabinet ministers during the censure debate in the chamber on Wednesday. The opposition demanded she reply to its queries about thegovernment’srice pledging scheme personally, instead of getting Deputy Prime Minister and CommerceMinister Niwatthamrong Bunsongphaisantodo the explaining for her. CHANATKATANYU

She made the admission to the opposition on the second day of the censure debate in parliament on Wednesday.

The opposition Democrats levelled accusations of many irregularities in the rice scheme.

The party's MPs slammed the prime minister for having Deputy Prime Minister and Commerce Minister Niwatthamrong Bunsongphaisan answer censure debate queries about the rice-pledging programme on her behalf.

When Ms Yingluck rose to answer the questions, she said she was the chairwoman of the National Rice Policy Committee.

She admitted she had assigned Mr Niwatthamrong to chair all the panel meetings on her behalf.

She insisted the rice-pledging scheme was useful because it raised farmers' incomes.

However, Ms Yingluck said she has ordered a swift investigation into alleged corruption in the programme.

The controversial rice scheme was the dominant issue in yesterday's censure debate.

Democrat MPs accused Ms Yingluck of trying to avoid the issue while MPs of her ruling Pheu Thai Party argued for Mr Niwatthamrong's right to explain on behalf of the premier.

The arguments from both sides of the chamber lasted about half an hour. Democrat MP Chaiwat Traisunant was ordered by the deputy parliament president, who was moderating the session, to leave the chamber for refusing to stop his protests against Ms Yingluck.

Democrat MP for Phitsanulok Warong Detkitwikrom was the main opposition debater on the rice issue.

He said his party had uncovered corruption in government-to-government rice export deals, in the sale of government rice through brokers, and in donations of rotten rice to people.

The Democrat Party has filed its rice corruption-related complaints with the National Anti-Corruption Commission.

Dr Warong also noted the government had been unable to sell pledged rice, so it had delayed the payment of money to the farmers who had pledged their paddy with the government.

The Democrat also said the government released pledged rice by selling bagged rice at a discount and claiming it will help lower people's living costs. Dr Warong said the government's latest amount of rice for discount sales came to 1.8 million tonnes. Based on the retail price of 70 baht per five-kilogramme bag, the sales would make a profit of around 8 billion baht.

The Public Warehouse Organisation supervised the retail sale of rice. Some of the organisation's senior officials have close connections with politicians and with a rice broker, he said.

Dr Warong claimed of the projected profit of 8 billion baht, 5 billion baht was going into the pockets of certain politicians.

Dr Warong demanded Ms Yingluck take full responsibility in her capacity as the chairwoman of the National Rice Policy Committee.

Opposition and Democrat Party leader Abhisit Vejjajiva said the prime minister had tried to distance herself from the rice issue.

Ms Yingluck should decide whether the rice-pledging scheme must be reviewed.

Mr Niwatthamrong admitted corruption had been found in the bagged rice release and the project had been suspended.

He said his party has submitted a complaint about the matter to the Constitution Court through the parliament president.