Tensions rose in Pathum Thani and Maha Sarakham yesterday when pro-government supporters clashed with anti-government demonstrators during the latter's march to the provincial hall. 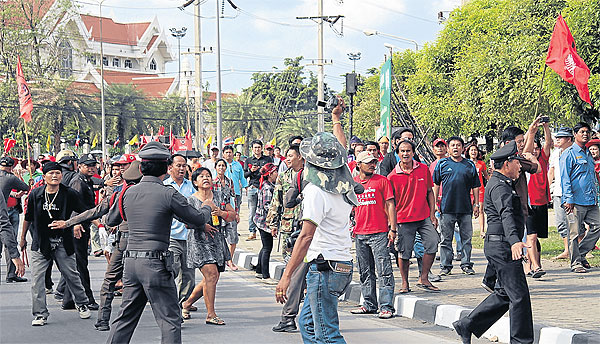 About 200 pro-government red-shirt supporters gather near Pathum Thani provincial hall yesterday to counter anti-government protesters rallying at the site. The two groups verbally abused each other, prompting police to intervene before both sides agreed to disperse. PONGPAT WONGYALA

Confrontation broke out in the afternoon near Pathum Thani's provincial hall after some 200 red shirts gathered to voice their opposition to anti-government protesters' attempts to cripple the government.

The red shirts cursed and hurled bottles of water at the 100 protesters. Police intervened and managed to keep the two sides apart.

Some protesters reportedly sustained minor injuries in the skirmish.

In Maha Sarakham, the anti-government protesters were gathering in front of a teacher's cooperative office in Muang district when two pickup trucks carrying red shirts arrived.

A woman got out and allegedly hit several members of the anti-government group with a flag pole.

The blockade of government offices continued yesterday in several provinces, as called for by protest leader Suthep Thaugsuban.

In Nakhon Ratchasima, about 1,500 anti-government protesters rallied at Suranari Monument and marched to the 2nd Army Region headquarters and to the provincial hall. Governor Winai Buapradit met the protesters. Confronted by the sound of whistle blowing, he agreed to shut down the provincial hall for the rest of the week.

In Bangkok, the anti-government protesters yesterday marched from their base on Ratchadamnoen Avenue to make symbolic takeovers of more state offices, including the ministries of Defence and Education, and the Royal Thai Police (RTP). Led by Chitpas Bhirombhakdi, a deputy Democrat spokeswoman, the protesters marched from the Democracy Monument to the Defence Ministry, which was tightly protected by barbed wire blockades.

Col Khongcheep was given flowers and whistles by the protesters, but refused to blow a whistle. Soldiers who were deployed to boost security were ordered not to accept any flowers or whistles.

From Makkhawan Rangsan Bridge, members of the People's Democratic Force to Overthrow Thaksinism led by Gen Preecha Iamsuphan marched to the RTP. Eighteen companies of crowd control police were deployed around the RTP. The protesters partially cut the RTP's power and water supplies for about two hours.

Pol Lt Gen Jongjate Aojanepong, director of the Police General Hospital, said the hospital, where about 500 patients are being treated, was not affected by the power cut. Pol Lt Col Mana Thanyawanich was injured by a slingshot during the protest.

Gen Preecha later submitted a petition to Pol Lt Gen Amnat An-atgnam, asking police not to use violence against the protesters. The group dispersed about 6.30pm.