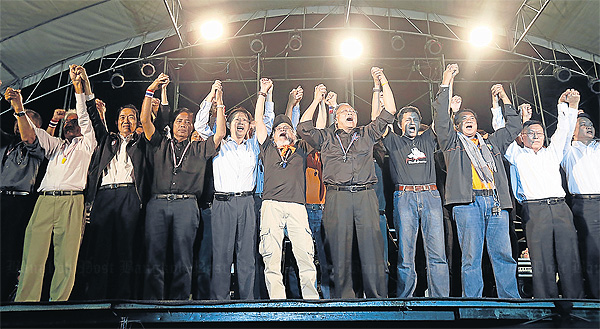 Protest leader Suthep Thaugsuban and core members of anti-government groups raise their arms as they appear on stage at the government complex protest venue to call for the total seizure of key government agencies over the weekend. THITI WANNAMONTHA

Mr Suthep said the goal is to paralyse the Yingluck Shinawatra administration, and he set his sights on declaring victory against the government tomorrow.

Mr Suthep last night also declared the formation of the "People's Committee for Thailand's Absolute Democracy under the Constitutional Monarchy." He announced he would serve as its secretary-general.

"His actions have caused damage to the country and no one knows how much damage his actions will cause in the future, so people must think carefully before taking part in the rally," he said.

"The government respects the people's right to express their opinions, but exercising those rights and liberties must be within the legal limits," he said.

Appearing last night on stage at the government complex which he and his protesters have partially occupied since Wednesday, Mr Suthep announced the "total seizure" to facilitate "the people's revolution" would begin immediately.

He emphasised the need for the Thai people to rise up together in order to bring about victory.

"The operation starts tonight. We here at the government complex will take total control of the rest [of the agencies].

"Starting Monday state officials will leave work until they are told otherwise except those working for the Administrative Court, the Constitution Court and the armed forces," he announced to about 20,000 supporters who had gathered at the complex.

He said state telecom firms TOT Plc and CAT Telecom Plc, which are located nearby, would be seized by this morning.

Other targets to be stormed tomorrow would include Government House, parliament, the Royal Thai Police, the Metropolitan Police Bureau, the Interior Ministry, Education Ministry, Foreign Ministry, and the Labour Ministry in which the government's Centre for the Administration of Peace and Order is located.

"Our networks have made visits to those places and it is time for real action," Mr Suthep said.

State enterprise workers should also leave work starting on Monday except for those at Thai Airways International, the State Railway of Thailand, Transport Co and the Mass Bangkok Transit Authority to avoid disrupting public services, the protest leader said.

He asked anti-government protesters in the provinces to lay siege to more provincial halls.

Standing shoulder to shoulder with him on stage were core members of other anti-government groups including Green Politics coordinator Suriyasai Katasila, academic Sombat Thamrongthanyawong, leaders of the Network of Students and People for Reform of Thailand (NSPRT), the People's Democratic Force to Overthrow Thaksinism, the Dhamma Army, and The State Enterprises Workers' Relations Confederation.

Mr Suthep said he and other protest leaders are ready to face prosecution after their campaign ends.

"We are ready to accept that. We will not flee," he told his supporters.

Provincial governors themselves must not commit illegal acts encouraged by the protest leader, he said.

"Mr Suthep has publicly admitted that he is violating the law in order to triumph over the government. Therefore, the people should not join his movement," Mr Charupong said.

He warned that Mr Suthep's actions are deemed as criminal offences that carry heavy penalties.

Police would avoid using force but if it is necessary, operations would follow legal procedures and the law to restrain protesters from breaking into state premises, he said.

Information and Communication Technology Minister Anudith Nakornthap said the ministry had already prepared a backup system to ensure that communication systems would not be affected if anti-government protesters take control of CAT Telecom and TOT. He also urged the protesters to refrain from disrupting national communication services.

Earlier in the day yesterday about 11am, around 1,500 NSPRT protesters, led by Uthai Yodmanee, left their camp in the Nang Loeng area.

Their destination was not disclosed to the demonstrators.

NSPRT leaders then ordered their supporters to stop at the army headquarters on Ratchadamnoen Nok Avenue. About 11.45am, the leaders urged protesters to break down the gate and storm into the compound, but not enter the main building.

They crowd complied and occupied the grounds in front of the main building. There was no resistance from any of the soldiers on duty.

The protest leaders presented a letter to army commander Prayuth Chan-ocha through army secretary Polapat Wannapak, asking if the army chief would continue to support the "dictator government".

Meanwhile, around 10,000 business operators and office workers on Phetchaburi Road also gathered and marched to the Pheu Thai Party headquarters yesterday, calling on Prime Minister Yingluck Shinawatra to step down.

The party said it had been slandered by critics who accused it of rejecting the authority of the Constitution Court.

In fact, the party disagreed with the court's ruling on the charter amendment draft on the composition of the Senate because it did not believe the court had any jurisdiction over the matter based on the current constitution.

"The party did not reject the Constitution Court's power in general," the statement said.