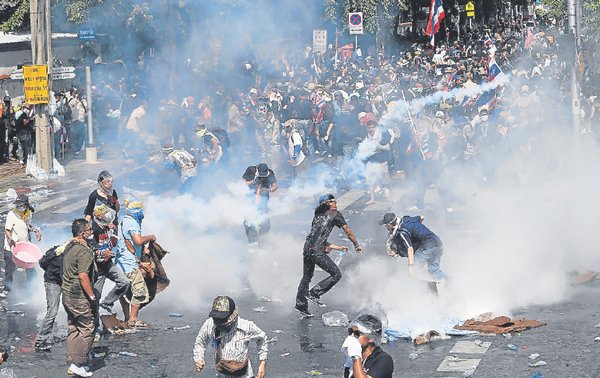 The main intersection near the Metropolitan Police Bureau turned into a battleground for hours Sunday as police officers fired tear gas at thousands of anti-government protesters who tried unsuccessfully to break through barricades to seize the MPB. (Photo by Thiti Wannamontha)

Mr Suthep told a press conference before protesters at Government House that the prime minister was given the two-day ultimatum in a meeting that took place at about 8.30pm.

The meeting was held before all armed forces leaders including Army chief Gen Prayuth Chan-ocha, he said.

Mr Suthep said the meeting at an undisclosed location was not to negotiate with Ms Yingluck. The talks were to spell out the stance of the People's Democratic Reform Committee (PDRC) which is aimed at political reform by the People's Council.

The resignation of the prime minister and a House dissolution was not enough to satisfy the protesters, he said.

"There was no negotiation and no compromise," he said, stressing that it would be the last meeting between the two.

"This is the only one and there will be no more until a victory for the people,'' he said.

There was no immediate confirmation of Mr Suthep's speech, either from the armed forces or from Ms Yingluck or her office.

Mr Suthep said the armed forces also made clear their position that they stand by the nation.

"People are waiting for your decision," the protest leader said he told the generals.

He did not say what armed forces leaders were present at the meeting. Earlier Sunday, army commander Gen Prayuth Chan-ocha had called for talks between Mr Suthep and Ms Yingluck, who also is defence minister.

The meeting was the first time that the top military leaders had become involved since Mr Suthep led the rally for a month to end the Thaksin regime.

A summary of Sunday's events on the barricades follows this photo.

Here is a summary of the rest of the events of Sunday, Dec 1: