All for one, one for all
Thailand
Politics

All for one, one for all

As he awaits arrest, Suthep finds solace in the comfort of his family - Food, drink, gas masks, raincoats, rice sacks _ everything you need for a successful protest is at Ratchadamnoen - An insightful book into the 1932 revolution is being revived to show how little has changed

Since the day former Democrat Party secretary-general Suthep Thaugsuban launched the anti-government rally more than a month ago, his family has stood by him. 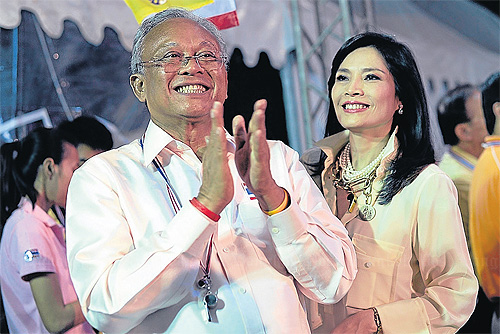 Anti-government protest leader Suthep Thaugsuban enjoys the rally with his wife, Srisakul Promphan, by his side.

His wife, Srisakul Promphan, has been a source of emotional strength for Mr Suthep, as are their children from the couple's previous marriages.

Mrs Srisakul was by Mr Suthep's side when he led the anti-government crowds at Samsen railway station before the protest site was moved to Ratchadamnoen Avenue.

The protesters later swarmed the government office complex on Chaeng Watthana Road to which they have laid siege. The complex has since been Mr Suthep's home away from home.

Mrs Srisakul looks after Mr Suthep while trying to see to it that he avoids offensive language, which he might let slip, as he speaks to the protesters.

Mrs Srisakul's son, Akanat Promphan, is close to his step-father. He has resigned as a Democrat Party MP along with Mr Suthep to lead the protesters and works as Mr Suthep's personal secretary, according to a source close to the family.

Mr Akanat is responsible for receiving and screening all sorts of information sent to Mr Suthep via the many communication modes. Where necessary, he also meets people and conveys their messages to Mr Suthep.

Before he became an MP for the first time, Mr Akanat worked as Mr Suthep's political secretary.

Mr Akanat's younger sister, Theerapha Promphan, also helps her step-father with appointments and minds his food and his health.

When she sits in front of the computer, she harnesses the power of social media and helps Mr Suthep interact online with armies of young protest sympathisers.

The source said normally Mr Tan takes care of his family's Sri Suban farm and other businesses in the southern province of Surat Thani.

During the 2011 flood crisis, Mr Tan supplied raw materials to the Democrat Party's southern kitchen for the flood victims. Now, he has brought back the kitchen with southern food on offer to feed the protesters at the Ratchadamnoen rally site.

Mr Tan's other important role is to counter his father's political opponents on the social media.

He has recently made headlines with his heated responses to Facebook messages critical of Mr Suthep reportedly posted on the page belonging to Panthongtae Shinawatra, the only son of deposed prime minister Thaksin Shinawatra.

Mr Tan's sisters, Namtarn and Namthip, also provide a strong mental cushion for Mr Suthep. Ms Namtarn, an engineer, and Ms Namthip, an architect, run appointment books for Mr Suthep. They were not actively involved in Mr Suthep's political sphere before, but now all of the family is in on the action.

The two sisters have designed a T-shirt bearing a logo urging support for Mr Suthep as well as the protest logos which have caught on with the protesters.

With Mr Suthep now being slapped with an insurrection charge for leading the protests, family counts more than ever.

The source said after announcing a permanent end to his political career to concentrate on political activism full-time, Mr Suthep's wish now may be that none of his children will ever follow in his footsteps and enter politics.

The 'troops' are well-stocked

No one is going hungry at the anti-government protest on Ratchadamnoen Avenue. Known as Khrua Ratchadamnoen (Ratchadamnoen kitchen), dozens of makeshift food stalls have popped up to feed tens of thousands of demonstrators since the rally was relocated from Samsen railway station early last month.

While many food stands are sponsored by protest leaders and financiers, several dishes are served courtesy of private supporters.

And the anti-government protesters do not just have food donations. They have mountains of donated goods _ from drinking water to gas masks to swimming goggles to rice sacks.

Many of these items poured in to the main stage at Ratchadamnoen early this week when the protesters battled it out with the police, who fired rounds of tear gas to keep them from seizing key government buildings such as Government House and the Metropolitan Police Bureau headquarters.

Fresh water is for irrigating eyes and wounds and for cooling off. Swimming goggles, plastic raincoats and towels are for protecting the demonstrators against tear gas. Heavy duty gloves, rice sacks and water buckets are for those determined to handle hot tear gas canisters fired by the police.

When the protest coordinators made an announcement for donations, these supplies were delivered in a matter of hours. The protest supporters have coordinated their movements through social networks.

It was reported three tractors arrived at the Ratchadamnoen protest site within an hour after the coordinator asked for machinery to tear down police barricades.

Thousands of balloons were delivered from Nakhon Pathom. The plan was to release them into the air to disturb police helicopters hovering over the protest venue.

However, deliveries of some of these supplies were blocked by police. Empty rice sacks from Yaowarat were held up at Samranrat police station, not too far from the Democracy Monument.

When word went out that the empty rice sacks, used to cover tear gas canisters to contain the spread of the gas, were being confiscated, a group of people swarmed the police station to pressure the police into releasing the consignment.

Upon seeing some of those faces, police hurriedly released the confiscated rice sacks.

A senior police officer from Samranrat police station reportedly rushed to Ratchadamnoen and apologised for the inconvenience.

The display of support is not limited to cash or goods donations.

When protest leader Suthep Thaugsuban, who laid siege to the Finance Ministry last week, announced that security forces were on the way to arrest him, the protesters rushed from their beds and used their cars to block any police access to the ministry.

A similar sight was reported at the government office complex on Chaeng Watthana Road, from where Mr Suthep directs the protests, when word got out that the police would come for Mr Suthep, who faces an arrest warrant on insurrection charges.

These occurrences, according to political observers, are quite rare and indicate that the protesters came to the Ratchadamnoen gathering not just for free food.

Given the political upheaval, the Krairiksh siblings _ Democrat Party MP for Phitsanulok Juti and his sister, senator Pikulkaew _ feel there is no better time to dust off their grandfather's book and have it reprinted.

Tua Tai Tae Cheu Yung (After Death, the Name Remains) was penned by Lt Jongkol Krairiksh, a former deputy House speaker and a three-time MP for Phitsanulok, under the pseudonym ''Saowarak''. 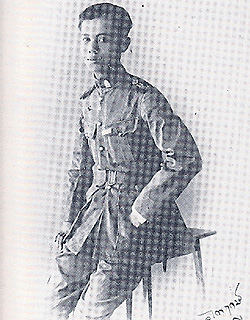 The author revisits the 1932 Siam Revolution, which put an end to the absolute monarchy and ushered the country into the era of democracy, and its aftermath including an attempted coup d'etat led by Prince Baworndej in 1933.

Lt Jongkol's accounts are considered up close and personal.

He himself was arrested and imprisoned for 11 years for his involvement in the Baworndej revolt, the country's first experience of a military putsch.

After serving his sentence, Lt Jongkol contested the election in Phitsanulok and defeated his opponent, who was a former governor of the province.

Another interesting element of the book is a passage about Col Phraya Srisitthisongkhram, or Din Tharap, a core member of the Baworndej revolt who was killed in the armed struggle for power.

The book is full of praise for the colonel who died accused of insurrection.

According to the book, Col Phraya's actions, despite being illegal, were not immoral. Although it was considered an act of insurrection _ and still is today _ it was overshadowed by something good: it was for the country, not for personal gain.

The story about Col Phraya indicates that he was killed because he refused to leave his men behind during the crackdown by government forces. He was stripped of his rank after his death for being a kabot (traitor).

In the introduction, Lt Jongkol said he wrote the book to detail how the country was transformed into a democracy and how the seeds of chaos were sown.

He said the book was intended to allow readers to reflect on the country and figure out what is safe and best when engaging in politics.

''Even a statesman needs to know history to guide him on the political path. Who will believe a man with skills but not knowledge?''

Written in the 1960s, several elements in the book still resonate today.

They include the struggle for political power, nepotism and governments without principle, according to some book reviewers. The readers can feel something like that is still happening today, they said.

Sen Pikulkaew said her grandfather's book is an antique so the family has decided to reprint it for educational purposes. The reprint also marks the 100th anniversary of the Krairiksh family this year.

Sen Pikulkaew said Lt Jongkol wrote a number of books including Silapa Luektang (Art of Elections), Chai Chana Tee Lat Ya (Victory at Lat Ya), and Yoo Yang Sua (Live Like a Tiger).

She said these books will be reprinted and distributed to libraries nationwide.