Prime Minister Yingluck Shinawatra broke down in tears on Tuesday and insisted that she will not step down as caretaker premier until a new cabinet has been formed.

"We are fellow Thais. Why do we have to hurt one another?

"I have retreated so far and I don't know where to retreat further.

"Do you (anti-government protesters) want me to not even set foot on Thai soil?" an emotional Ms Yingluck, also defence minister, said at the Thai Army Club where the weekly cabinet meeting was held and lasted about one hour.

She called on the protesters to not condemn the Shinawatra clan, and asked the opposition Democrat Party to help preserve democracy by taking part in the Feb 2 general election.

She also urged the demonstrators use the electoral system to choose who will run the next administration.

"If she complies, the protests may end. If not, the PDRC will decide on the next step," PDRC spokesman Akanat Promphan, a stepson of Mr Suthep, said. 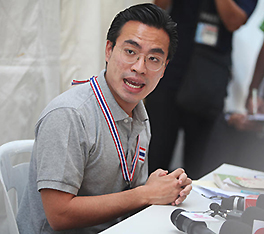 Mr Akanat said the anti-government protest on Monday was considered a true victory for the people. Even when Ms Yingluck announced a House dissolution on national television on Monday morning, the people did not retreat but continued to march to uproot the "Thaksin regime".

The Pheu Thai Party's decision to make Ms Yingluck candidate No 1 on its party list meant that the party was challenging the power of the people, and it could lead to further unrest, he said.

"Ms Yingluck must do what she has said she will do -- anything to bring about reconciliation -- by resigning as caretaker premier and not backing anyone to replace her," said the former Democrat Party MP.

Gen Prayuth, however, was happy that there was no violence and would like to thank the people and security officials for respecting each other.

"The army chief is not being passive, nor is he at ease, and he's trying to find ways to resolve the problem as quickly as possible," Col Winthai said.

Col Winthai urged people and officials to exercise patience and jointly find proper solutions where all sides win, for the best interests of the country.

A group of anti-government demonstrators on Tuesday gather outside the Army Club. (Bangkok Post video)