The protracted political crisis remained deadlocked on Saturday as the city battened down for major rallies that could result in the biggest gridlock Bangkok has ever seen. 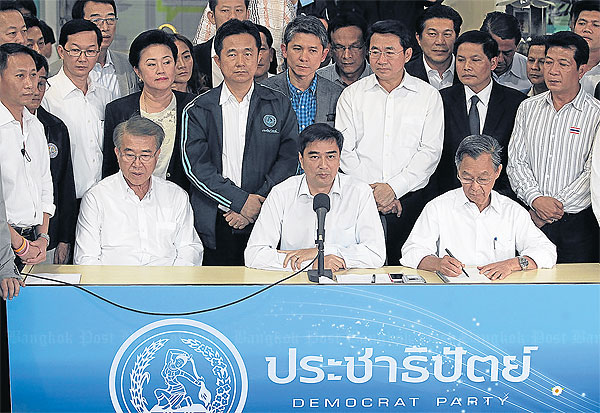 OUT OF THE RACE: Democrat Party leader Abhisit Vejjajiva and party members announce yesterday they will boycott the Feb 2 election. Sitting side by side with him is party chief adviser Chuan Leekpai, right, and former party leader Banyat Bantadtan, left.

Although the Democrats decided on Saturday to boycott the Feb 2 election, they vowed not to obstruct it.

Prime Minister Yingluck Shinawatra, meanwhile, offered a new proposal saying if Pheu Thai is the government after the elections it will introduce reforms and call elections again in one year.

The proposal was shot down by protest leader Suthep Thaugsuban who said he hoped today's rally will raise the pressure on Ms Yingluck and her caretaker government by another notch.

Mr Suthep demanded the prime minister and the government step down from their caretaker role to pave the way for his proposed people's council to reform rules and regulations before an election can take place.

Speaking in a televised address from Kalasin yesterday afternoon, Ms Yingluck said the government agreed with the call for widespread reforms except that it believed the elections and national reforms could proceed together.

She said the national reforms would have to be carried out by the mechanisms of parliament and government.

"In fact, the elections are necessary for these reforms to take place. This is because we need the legislative branch to serve as a core mechanism to drive the reforms," she said.

To give the public assurances that the new government and the new parliament would take reforms as a national agenda item, she urged all political parties that contest the poll and other concerned parties to sign an agreement to set up a "reform council".

The reform council would comprise people from all professional groups and organisations and entities such as the council of university presidents, all political parties, senior state officials and local organisations.

The reform council would have a two-year term and its main task would be to propose mechanisms for reforming the country, after which politics would truly represent the voice of the people.

"The government is determined to see the reform process begin as soon as possible and hopes that the reform can begin soon after all sides come to an agreement," she said.

The ruling Pheu Thai Party yesterday said if the party wins a mandate in the elections, it will immediately proceed with national reforms.

A source at the Defence Ministry said Ms Yingluck's proposed reform council had received the nod from military leaders. She floated the idea during the Defence Council meeting on Friday.

Army commander Prayuth Chan-ocha on Friday appeared to have opened the way for Ms Yingluck. He proposed the formation of a people's assembly comprising "all colours" but did not say if it should be formed before or after Feb 2.

The source said Ms Yingluck told military leaders the snap election would go ahead and asked them to support it.

According to the source, the prime minister's reform council was in part modelled on the "Sanam Ma Council" _ a people's assembly formed after the October 1973 student uprising.

But he said the Democrats were not opposed to an election.

The politicians contesting the forthcoming poll are saying they want to prolong the regime which thrives on the system of "Thaksinomics", he said.

Mr Abhisit said the boycott was decided as the political system had failed for almost a decade and the party did not believe the poll would lead to national reforms or restore public confidence in the parliamentary system.

"Instead they will see me as part of the elements that will prolong failed politics," he said.

He said the party had to take a long and difficult road to represent the people.

The number of confirmed new cases is rising again, but daily coronavirus-related deaths are down slightly, health officials reported on Thursday.

NAKHON RATCHASIMA: An elderly woman was killed and six people injured when the pickup truck taking them to a housewarming and a passenger van collided at an intersection in Chok Chai district on Thursday morning.

Asian markets posted big early losses Thursday, after Wall Street suffered one of its worst batterings in two years in the previous session.