The message upcountry is clear: Bangkok is not the voice of the nation

Scattered protests and political chaos have rocked Bangkok for almost two months. But on a peaceful morning, 520km away from Bangkok in a quiet town in Loei province, the political situation is dominating conversations in a simple restaurant. 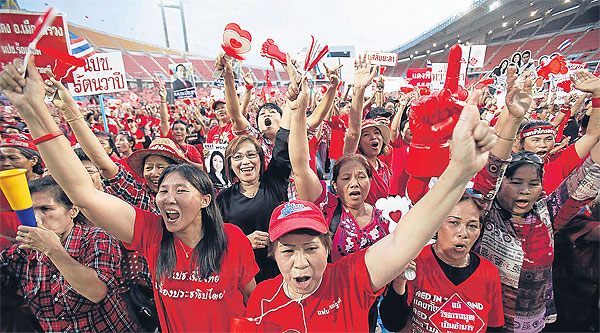 This file photo shows pro-government red shirts at the Rajamangala National Stadium in Hua Mak on the same day as the Constitution Court ruled the draft amendment on the Senate’s composition was unconstitutional. THANARAK KHOONTON

As part of the morning ritual, locals meet to discuss the political situation, particularly the election set for Feb 2.

There are red signs, red tablecloths, and red shirts. This restaurant is a meeting point for red-shirt supporters.

They said that if the election was disrupted by protesters in Bangkok, they would launch a counter rally.

Daragon Pakdewan, 60, a Loei native and a staunch red shirt, insisted the election is necessary and it has to happen on Feb 2.

''This is a democratic country,'' she said. ''We have the right to support what is right. If the mass rally affects the election day or if it doesn't happen for some reason, we will protest too.

''Just wait and see, we won't sit there and do nothing. You have no idea how many people we have and what we are capable of doing.''

Ms Daragon said there is no such thing as the ''Thaksin regime'', using protest leader Suthep Thaugsuban's term for the influence of ousted prime minister Thaksin Shinawatra over politicians and state officials.

''Thaksin has no influence over our decisions,'' she said. ''We are not attached to him. Please remember that we are not tied to anyone. Justice is the only thing we [support].

''Do you ever think of us as people with brains? Please don't insult us [and think that] because we are country people, we are stupid,'' she added.

One wrong idea Bangkok people have about red shirts is that they are against the monarchy, she said.

''We have been taught that His Majesty the King did a lot for our country,'' Ms Daragon said.

''We know how hard he worked to improve our livelihoods. No one can compare to [him and] what he did for us. How can we disrespect him? How can we not love him?''

Many people accuse red shirt supporters of being paid by Thaksin to join the rallies. But Ms Daragon said every single baht they spent came from their own pockets.

''We like good people and we like justice,'' she said. ''We have already crossed over from Thaksin a long, long time ago. What we are fighting for now is real democracy.''

Arnutch Saetor is another local who is opposed to the anti-government push of Mr Suthep's People's Democratic Reform Committee.

The 61-year-old, who moved to Loei in 1987 from Kanchanaburi, thinks the political movement is all part of a game. It started with disagreement over the amnesty bill, then the issue dragged on and on.

''I don't know why it isn't over yet,'' Ms Arnutch said. ''At first, Mr Suthep said he only wanted the amnesty bill not to pass. It didn't pass, but it still wasn't enough. Then they forced Ms Yingluck [Shinawatra, caretaker prime minister] to dissolve parliament, which she did, but it still was not enough. What else do you want?''

Ms Arnutch is furious about how the anti-government protesters treat democracy. ''You have to respect the law, you have to listen to the majority's voice. You have to stop right now,'' she said angrily.

''You can't think the protesters who joined the rally in Bangkok are the voice of the country. If you really want to measure it, you have to ask everyone in the country.''

Ms Arnutch suggests that if Mr Suthep is so confident in the voice of the protesters, he should play the game fairly through the election.

''The election would be the best way to measure what the majority thinks. Not everyone agrees with what the protest leaders are trying to do,'' she said.

''Do you think all rural people are hillbillies who can be bought [for votes]?

''I admit we are uneducated. We are not as smart as Bangkok people, but we have dignity and we don't cheat like them. Please don't insult us.''

Ms Arnutch said in her view Mr Suthep is cheating.

''He cheated the voice of the people, cheated the country's laws and cheated on people's rights,'' she said.

Even though the red shirts in Loei disagree with the anti-government movement's activities in Bangkok, they share the same concerns as the protesters.

''I didn't support the amnesty bill,'' Ms Arnutch said. ''When the government tried to pass it, we were really upset because I don't want the bad people who killed and hurt [red shirts] during the 2010 protests to get away with no consequences.''

Just before the conversation ended, an old man sitting at the far end of the table spoke up.

He didn't introduce himself or join the discussion, but his only comment was a strong message for everyone in Thailand, especially for people in the capital.

''Just remember, Bangkok is not Thailand, and the voice of Bangkokians is not the voice of the country,'' he said.