ANALYSIS: Candidate choices show that the Shinawatra family is still on top

The placement of former prime minister Thaksin Shinawatra's immediate family members as leading Pheu Thai Party list-MP candidates is an attempt to show the Shinawatra family remains popular among the majority of Thais. 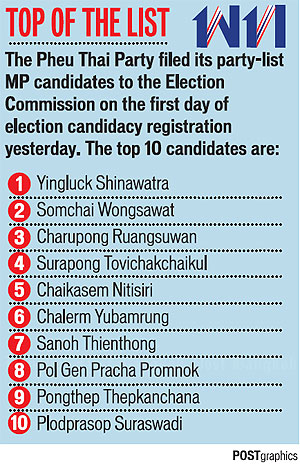 The Shinawatra family's proximity to Pheu Thai Party power also deals a serious blow to the huge crowds of anti-government protesters in Bangkok and other provinces.

Caretaker Prime Minister and Defence Minister Yingluck Shinawatra, one of Thaksin's younger sisters, is the ruling Pheu Thai Party's No 1 list-MP candidate. The No 2 candidate is Somchai Wongsawat, Thaksin's brother-in-law.

Former leaders of the red-shirt United Front for Democracy against Dictatorship are also named as Pheu Thai list-MP candidates. Nattawut Saikuar is at 19th, Jatuporn Prompan at 20th and Veerakan Musikapong at 34th. Suranand Vejjajiva, secretary-general to the caretaker prime minister, lobbyist Wattana Muangsuk, and Prayuth Siripanich who proposed the controversial blanket amnesty bill allegedly in favour of Thaksin are in the group lying 40th-60th.

The list shows the Shinawatra family will still be the Pheu Thai Party's selling point at the next election, in defiance of the anti-government protesters campaign to uproot the Thaksin regime.

Before the list of Pheu Thai list-MP candidates was released, some reports claimed Ms Yingluck would not take the No 1 spot to ease political tensions, but this has not been the case.

Key figures of the Pheu Thai Party believe the party's vote base is larger than that of its opponents and therefore it is highly likely it will win the next general election, a party source said.

This will show that the majority of Thai people still support the Pheu Thai Party and the Shinawatra family, and people who support Mr Suthep's anti-government movements are inferior.

Although it is uncertain if the next general election will happen on Feb 2 as scheduled, the Pheu Thai Party will prepare a few prime minister candidates to suit different political situations.

With the ongoing political unrest, if the Feb 2 election takes place and the Pheu Thai Party wins, it is not yet clear whether deposed prime minister Thaksin Shinawatra will nominate Yingluck, or another member of his family to be the next prime minister.

The constitution does not require the number one list-MP of the winning party to become the premier. It only stipulates that MPs vote to elect a prime minister.

If anti-government demonstrations die down, Ms Yingluck will be nominated as the next prime minister. But if Thaksin wants to quell the political troubles focused on her and still needs a reliable family member, he may nominate brother-in-law Somchai instead.

If anti-government demonstrators and the public accept the Pheu Thai Party's ideas for national reform, and Thaksin wants to conceal that the Shinawatra family is dominating Thai politics, he may nominate Mr Pongthep, the 9th list-MP candidate.

Mr Pongthep has been working for Thaksin since his participation in the Palang Dharma Party, and he is a legal expert with a positive image in the eyes of foreigners and investors.