Red-shirt political prisoners still support the caretaker government even though it has abandoned the blanket amnesty bill which would have secured their release. 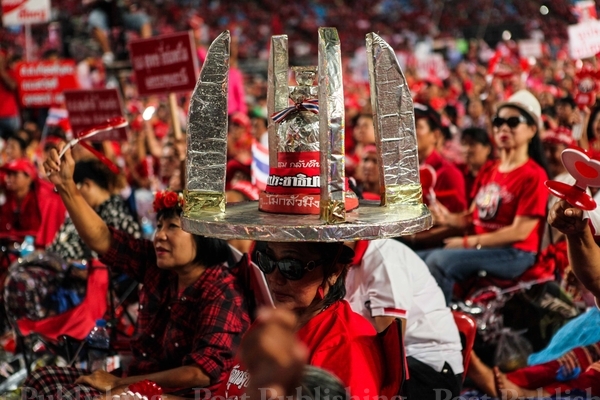 As they mark their third new year at Lak Si temporary prison, the red-shirt United Front for Democracy against Dictatorship (UDD) supporters are unhappy about the anti-government protests in Bangkok.

The inmates signed up in October last year in solidarity with the Pheu Thai MP-initiated amnesty bill that eventually forced the government to dissolve the House amid protests. The prison has 23 inmates who were convicted in relation to the 2010 political unrest.

All are rank and file supporters of the Pheu Thai Party, and received mostly hefty penalties for arson and illicit weapons offences.

Though they regret the bill resulted in the dissolution of the Yingluck Shinawatra government, they regard the protests as indecent and illegitimate.

"Our prime minister [Ms Yingluck] has given in to several unwarranted demands, but still the elite and nobility network [the protesters] are unhappy," said inmate Pattama Moolmil from Ubon Ratchathani, jailed for 34 years for setting fire to his provincial hall in the May 2010 unrest.

"They are making ever more ridiculous demands such as insisting the Shinawatra family leave the country for good."

She felt angry with the People's Democratic Reform Committee (PDRC) demonstrations which have tried to paralyse the capital and disrupt the Feb 2 election.

Protest leaders liked to claim the grassroot supporters had no education.

"I think they must be crazy thinking they are above others. They really do not understand the basics about equal rights in a democracy," she said.

"Their insults against rural folks are unacceptable and I wonder if they would be able to grow rice and fruit, do the household chores, look after transport and clean offices by themselves if we revolted."

She wished Thais would grow up and learn to live under democratic rules.

"Most people prefer to have representative systems and believe elections are a way forward. The minority from Bangkok should respect that," Ms Pattama said.

Sanong Ketsuwan, also from Ubon Ratchathani, said the prisoners at Lak Si initially supported the bill, which provided a blanket amnesty to all political offenders since the 2006 coup, because they wanted the country to move forward.

"We sympathise with families who lost their loved ones and those who were injured under the Abhisit Vejjajiva government's crackdown three years ago. But we are also political prisoners who have been deprived of our freedom. We want reconciliation," Mr Sanong said.

In the present fractured political climate, that would be difficult.

Another female inmate, who asked not to be named, said PDRC leaders such as Suthep Thaugsuban could still cause trouble to the government despite having broken so many laws.

"It seems punishment is unevenly applied against red-shirt demonstrators while the conservative nobility people are spared," said the inmate, from Khon Kaen.

"I was convicted of preventing the authorities from doing their duties in 2010 but the PDRC protesters are even worse and they still walk away free.

"What kind of justice is this?"