The father of Nitcharee "Nong Than" Peneakchanasak, who lost both legs in a train accident in Singapore almost three years ago, is "very disappointed" with the Singaporean High Court's ruling against his daughter and has vowed to fight on for justice. 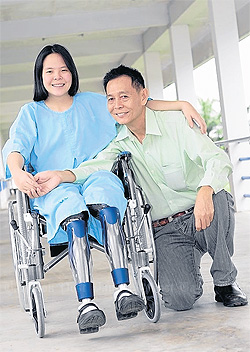 Nitcharee ‘Nong Than’ Peneakchanasak, 16, and her father Kittanesh. The family lost a Singaporean High Court case seeking S$3.4 million (about 81 million baht) in damages for an accident in which Nong Than fell on to the tracks of Singapore’s Ang Mo Kio MRT station on April 3, 2011, and lost her legs.

"As a father, I have to do everything to help seek justice for my beloved daughter," Mr Kittanesh told the Bangkok Post on Friday in the wake of the court ruling.

"I have yet to consult with my Singaporean lawyer to look at whether there are more legal avenues to appeal against the ruling of the Singaporean court."

Nong Than fell on to the tracks of Ang Mo Kio MRT station as a train was approaching on April 3, 2011, and lost both of her legs when the train hit her.

The girl, now 16, had sued the transport operator Singaporean Mass Rapid Transit (SMRT) and the Land Transport Authority (LTA) for S$3.4 million (about 81 million baht), claiming that the defendants had breached their duty of care by failing to ensure that the station was reasonably safe for passengers.

But Justice Vinodh Coomaraswamy, in an 81-page written judgement released on Thursday, dismissed her claim.

He found that Ang Mo Kio station was "reasonably safe" at the time she was injured and the defendants are not liable for any negligence causing those injuries.

"The plaintiff's injuries are undoubtedly tragic, especially for one so young," said the judge, quoted in the online edition of the Straits Times newspaper. "But the law of negligence awards compensation based on a defendant's culpability, not simply because a plaintiff has suffered harm,".

Nevertheless, Mr Kittanesh was "very disappointed" with the court's ruling and was shocked when his Singaporean lawyer, Cosmas Gomez, called to inform him of the verdict.

Mr Gomez was only recently informed that the court would read the verdict on Thursday, so he did not have time to get Mr Kittanesh and Nong Than to go to Singapore to hear the ruling.

However, Mr Kittanesh said Mr Gomez will come to meet him and Nong Than on Friday and hand them the judgement and discuss what to do next.

Mr Kittanesh said that in tandem with fighting the legal battle he would either submit a protest note against the court's ruling to the Singapore embassy in Thailand or stage a peaceful protest in front of the embassy.

"My daughter is now disabled and will have to walk with prosthetic legs for the rest of her life, but she lost her case against the SMRT and the LTA," he said.

He decided to seek justice for Nong Than shortly after the accident because he and Mr Gomez had conducted a thorough review of the Singaporean public transport system and found that the SMRT had not installed platform screen doors at Ang Mo Kio station to prevent passengers from falling on to the tracks.

Their review found that at least 24 passengers had been killed in previous years after falling on to the railway tracks at MRT stations in Singapore, including two at Ang Mo Kio.

Mr Kittanesh claimed that after he submitted the case against the SMRT and the LTA, they then installed platform screen doors at Ang Mo Kio.

He said he had lodged the lawsuit against the two Singaporean agencies as he wanted them to help pay medical expenses and the cost of artificial legs that need to be changed every five years. Nong Than's prosthetic legs cost 5 million baht a pair.

He said it was impossible that his daughter had felt faint, dizzy and weak prior to falling on to the railway tracks, as claimed by the defendants, as she was a healthy and alert girl who could take care of herself.

"I am still convinced that my daughter fell on to the tracks at Ang Mo Kio MRT station due to a lack of safety measures at the station," Mr Kittanesh said.

He said his daughter was also shocked that she had lost the case against SMRT and LTA. "She asked me why the court had decided in favour of the defendants, but she told me she would never give up the fight," he said.

Nong Than is now a Mathayom 4 student at Mater Dei School in Bangkok.

She wants to be a psychiatrist and a law expert to provide counselling for those who have faced traumatic experiences. Mr Kittanesh says he believes Nong Than can achieve her goals as she is an optimistic person and is doing very well at school.