Anti-government demonstrators led by the People's Democratic Reform Committee on Sunday staged a warm-up march through the capital to urge the people to join the planned shut down of Bangkok on Jan 13 to force caretaker Prime Minister Yingluck Shinawatra to resign. 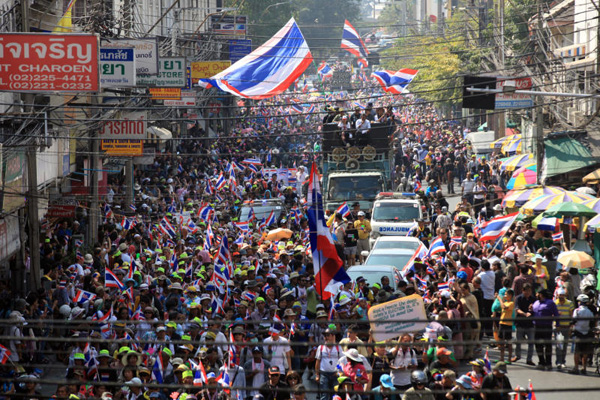 Starting at about 10am, the protesters walked from the Democracy Monument along Tanao, Ban Mor, Phra Phutthayodfa Bridge, Wang Burapha, July 22 circle and Maitreechit, Worachak and Mahachai roads.

They returned to the Democracy Monument at about 4pm, completing a distance of about 7.5km.

Mr Suthep said only the inner parts of the capital city where government offices are located would be shut down on Jan 13. They include the Lat Phrao intersection, Victory Monument, Asoke intersection, Ratchaprasong intersection and Pathumwan intersection.

The government office complex at Chaeng Wattana would be besieged by PDRC protesters from Nonthaburi province to prevent officials from getting to their offices.

Tida Thawornseth, chair of the United Front for Democracy against Dictatorship (UDD), and Jatuporn Prompan, a UDD core member, said at a press conference the so-called "Operation Bangkok Shutdown" was merely intended to distract public attention.

They said the UDD believed there would definitely be an attempt to stage a coup before Jan 13, citing a military report that there had been an unusual movement of a large number of troops to the 11th Infantry Regiment under the pretext of taking part in Children's Day on Jan 11 and Armed Forces Day on Jan 18.

In fact, it was a preparation for a coup, they said.

The Centre for the Administration of Peace and Order (Capo), meanwhile, issued a statement warning protesters planning to attend the “great mass uprising” on Jan 13 to take care and be watchful for any third-party that may try to cause violence during the demonstration.

The statement read by caretaker Information and Communication Technology Minister Anudith Nakornthap said that information gathered by the government indicated there had been purchases of large amounts of bullets for the same type of gun stolen from police vehicles on Dec 26 during the clash between protesters and the police at the Thai-Japanese sports stadium.

He said the government was worried that there would be a “third-party” who had the intention to cause violence and blame it on the police or the protesters as the police had already arrested some people with guns and bombs who confessed to being hired to launch attacks.

Gp Capt Anudith also reminded people who plan to join the demonstration to realise that they can carry on with legal action as advised by Mr Suthep, the PDRC leader, and other core leaders, but if their actions became illegal, they might be considered guilty as accomplices.

Democrat Party deputy leader Ong-art Klampaiboon said the government has conducted a smear campaign against protesters of various groups during the past two months in the hope of causing them to become tired and eventually abandon the rally.

Mr Ong-art said the first tactic used by the government was to make false accusations against the protesters. In one such smear campaign, the protesters were accused of capturing the Interior Ministry to assemble weapons and carry out acts of violence.

The second tactic involved intimidation against protest leaders and politicians in the opposition bloc.  For instance, the house of Democrat Party chief adviser Chuan Leekpai came under a gun attack, security guards had been shot and hand grenades were thrown into groups of protesters.

Third, the government had continued to fabricate news to discredit the protesters. Such fabrications included the Pheu Thai spokesman's claim that two retired generals with the initials "D" and "P" were on standby to back a coup.

These tactics had proved useless as the number of protesters had swelled, he said.

Mr Ong-art said the government had also lied to the public that the People's Democratic Reform Committee (PDRC) had mobilised as many as 6,000 hard-core members to create unrest during the planned Bangkok shutdown on Jan 13 to instigate a coup.

Mr Ong-art said the United Front for Democracy against Dictatorship (UDD) had declared it would bring the red shirts out in large numbers to counter the PDRC's "Operation Bangkok shutdown", causing fear that there would be a confrontation between the demonstrators of the two groups, followed by violent incidents.

He asked why the prime minister had not done anything to stop this from happening.

Should violence happen, the government must be held responsible, Mr Ong-art said.

Mallika Boonmeetrakul, a Democrat Party deputy spokeswoman, said Deputy Prime Minister Surapong Tovichakchaikul had made a threatening remark to the people by saying that those who joined the anti-government protest were liable to the death penalty.

Mr Surapong's threat was unacceptable since the protest would be peaceful and without arms.