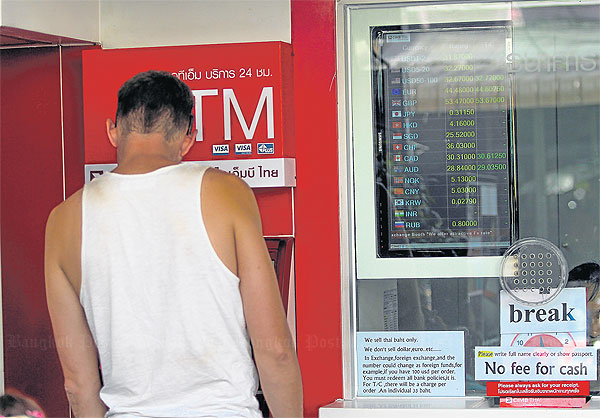 A foreigner stands next to a currency exchange booth in Bangkok on Friday. The baht dropped to its lowest level since 2010 yesterday, 33.11 per dollar at 5.45pm. PATTARAPONG CHATPATTARASILL

The warning came after the Joint Standing Committee on Commerce, Industry and Banking (JSCCIB), which comprises the Federation of Thai Industries (FTI), the Thai Chamber of Commerce and Thai Bankers' Association, met yesterday to assess the impact of political rallies on businesses.

"The protests have taken a toll on businesses, especially tourism," admitted TCC chairman Issara Vongkusolkit. "All members must accelerate preparing effective and prudent risk management to prevent any more adverse impacts if the protests continue."

He cited the hotel occupancy rate in Bangkok plunging to only 40-50%, down from a high of 90% in the high season.

The JSCCIB also called on all parties to avoid violence, volunteering to mediate talks between the dissident parties.

Late last year, this group called for immediate political reform and a "reform organisation" to be established. They want the government to issue an executive decree setting up the reform body.

The body would have one year to complete the changes that would become laws for successive governments.

In a joint statement, they asked politicians to wake up to the damage being done to the country, and use negotiations to help Thailand emerge from the crisis.

FTI chairman Payungsak Chartsuthipol said continued protests only harm the economy, driving the country's economic growth to below 5% this year.

He said all economic systems are stalled, as evidenced by declining purchase orders and company profits, tepid domestic consumption and a dampened investment climate.

Chartsiri Sophonpanich, chairman of the Thai Bankers' Association, said financial institutions have sufficient cash reserves at branches and ATMs to cover all withdrawals. Banks have not closed their branches near the rally sites yet.