Army chief Prayuth Chan-ocha said Tuesday the government would in principle be held responsible for any violence that might break out during anti-government demonstrations. 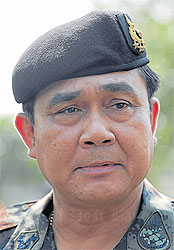 Commenting on next week's "shutdown" of the capital, Gen Prayuth said those who caused violence must be responsible for it. He also added: "If the people come out and there are clashes with people wounded or killed ... a riot, then the government must be held responsible in principle."

Gen Prayuth earlier declined to categorically rule out the possibility of another coup occurring under the current circumstances.

But yesterday he denied soldiers and armaments sent to Bangkok this week were aimed at staging a putsch.

He said the troop movements were an annual practice and had nothing to do with a coup.

"The public should not be afraid of things that have not yet occurred. If you can't see it, don't fear it," he said.

He shrugged off talk that rumours about a possible coup had caused the stock market to plunge, saying this had nothing to do with the military.

"I cannot confirm whether there will be or not be a coup," he said.

The current political situation was different from that in 2010 as it involved three groups _ the government, the PDRC and another group that was preparing to stage a move, he said, referring to the United Front for Democracy against Dictatorship (UDD). During the 2010 political crisis, Gen Prayuth said, two groups were involved in the clashes _ the government and the UDD.

The army chief stressed the military was duty-bound to take care of people from all groups.

He reiterated he did not support the use of violence and asked those involved in the conflict to work out a solution. They must not try to pass their conflict on to him to make a decision.

A coup, if it happens, will do more harm to the country, she added. Previous coups had failed to solve the political crisis. Coups had often triggered violence in several countries, she said.

Rumours of military intervention reached fever-pitch after the army announced plans to transport troops and armaments such as artillery and tanks to Bangkok this week.

Ms Yingluck said the government preferred a dialogue of all stakeholders to find solutions to the political divide.

She urged the public to listen to news with caution and not believe rumours.

In her role as caretaker defence minister, she believed the military top brass would consider the long-term consequences rather than decide on intervening as that approach was strongly rejected by the international community.

Second compact SUV offers more utility for the family that the style-led C-HR.