No panic, hoarding ahead of rallies

Life appears set to go on as usual on Jan 13, the day Bangkok is to be shut down by anti-government protesters. 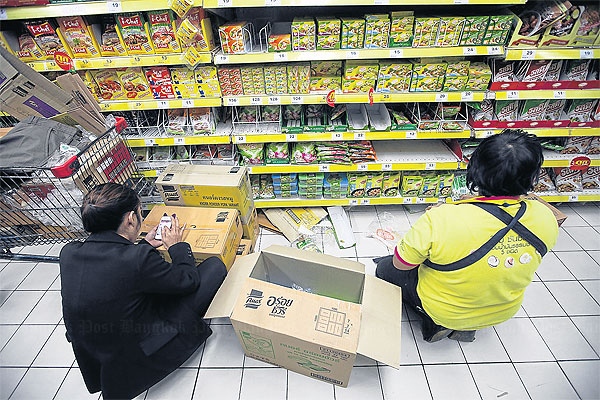 Don’t clear the shelves just yet: most consumers are reacting calmly and not panic purchasing or hoarding food and other basic items ahead of Monday’s planned shutdown of Bangkok. PATIPAT JANTHONG

Consumers have reacted calmly without panic purchasing or hoarding of food and other necessities.

The Bangkok Post surveyed consumers and retailers in many areas of Bangkok and found a normal situation.

Cindy, 32, a freelance writer who lives near MBK shopping centre, said she is not worried about the shutdown and has not seen fit to stock up at her condo.

''I'm not worried at all, as Bangkok will not be totally shut down,'' she said.

''If I cannot buy necessary items near my place, I'll ride my bicycle to find essential goods at other areas far from the protest site. Or I can find some good food to eat at the protest area.''

The writer said the situation differs from late 2011, when consumers went to hypermarkets and bought in bulk to see themselves through the floods.

Wipawee Wongsasirisak, 25, who works for a private company, said she is unconcerned about food shortages since supermarkets and grocery stores will still be open as usual.

''A shutdown cannot make a Bangkokian like me panic compared with the huge floods in 2011,'' she said. ''At that time we could not go out, public transport was totally disrupted and product supply was short.''

Respondents who live outside of the seven major protest spots said their daily lives will not be seriously affected.

Kaysinee, 55, said she bought some basic items and frozen foods in case the protest goes beyond a peaceful manner.

Most people living near the prime minister's house in the Yothin Pattana area showed no signs of anxiety over the imminent shutdown even though demonstrators have vowed to cut power and water to the house.

While consumers expressed no worries or inclination to hoard products at home, retail operators such as convenience stores, supermarkets and grocery shops have prepared for disruptions stemming from the upcoming mass rallies.

Phattaraporn Phenpraphat, the vice-president for marketing at Central Food Retail Co (CFR), the operator of Tops Supermarket, said the chain will stock up on fast-moving items like snacks, drinks, canned foods, instant noodles, dairy products and diapers at each branch.

Even with no panic purchases at its supermarkets, CFR has found online orders at it websites increasing for items such as powdered milk, soft drinks, beer and sugar.

Phaibul Kanokvatanawan, chief executive of The Mall Group, said customers have not engaged in panic purchases at the company's supermarkets.

''Our business will go on as usual, and we'll close some branches in risky areas as soon as the first bullet is fired,'' he said.

The group will lose 50 million baht if forced to close Siam Paragon shopping centre for one day.

Mr Phaibul said the company has enough grocery inventory to serve its customers, as it has a warehouse behind each supermarket with up to a month's supply of goods.

CP All, the operator of 7-Eleven convenience stores, has already doubled its stock inventory to supply stores in the heart of Bangkok near protest sites.

Moreover, the company has prepared small vans and motorcycles to deliver stock to stores near the demonstrations.

As for grocery stores, the owner of Eag Seng in Chinatown said business is proceeding as normal. The shop has not had to increase stock of its products, mostly dried foods such as rice, sugar, cereals, vegetable oil and chillies.

''We easily manage inventory from other sources and use motorcycle or boat via the Chao Praya River to ship things to the shop,'' she said.

''If the protests are prolonged, we can still smoothly run our business.''

The shop keeps a seven-day supply of inventory on hand.

The owners of New Sahaphan grocery store near Hua Lamphong railway station said while the store is near the protest area at the Pathumwan intersection, they do not expect rising demand from customers and have ordered no extra stock.

The Bangkok shutdown, which is expected to paralyse the capital at seven key protest sites, seems certain to affect some residents who might be inconvenienced when buying food or shopping near these areas.

Chalit Limpanavech, vice-president for academic affairs at the Marketing Association of Thailand, gives some tips for consumers to survive the shutdown.

Q: What should consumers prepare in terms of food and necessary products?

A: I don't think consumers need to prepare more necessary items to deal with the shutdown. This won't be a total shutdown; it's only a few areas and some government offices. Consumers need not panic. Just go about your daily routine. If you do not have to travel to the protest areas, avoid them.

Q: How long should food supplies last? How do we calculate this?

A: If consumers want to play it safe, they should stock dry foods for a week or two. I don't think the shutdown will last longer than a week. If so, then everyone will suffer, and the People's Democratic Reform Committee doesn't want that.

Q: What types of food staples should be kept?

Q: Where can people find supplies if their regular sources are affected by the shutdown?

A: As I mentioned, the shutdown will not affect the whole of Bangkok, so people still can travel to buy their supplies in unaffected districts such as Thon Buri, Bang Kapi and Lat Krabang.

Q: If consumers cannot buy fresh foods, what is the alternative?

A: Stock some dry or canned foods.

Q: What should consumers do if the shutdown becomes more widespread and lasts longer?

A: If this really happens, then stock foods for a few weeks. In my opinion as a marketer, I think this demonstration involves educated people, unlike the red-shirt protest in 2010. They all have to work and feed their families. The demonstrations are just to urge Prime Minister Yingluck Shinawatra to quit, while the Army will be asked to step in if any violence occurs.