Experts decry 'urban myth' of 700-baht homemade shields that fail to stop high-velocity bullets, saying relying on them during times of unrest could put protesters' lives in danger

Tests have revealed that makeshift vests lined with X-ray film being sold to protesters are highly ineffective at stopping bullets and using them could prove fatal. 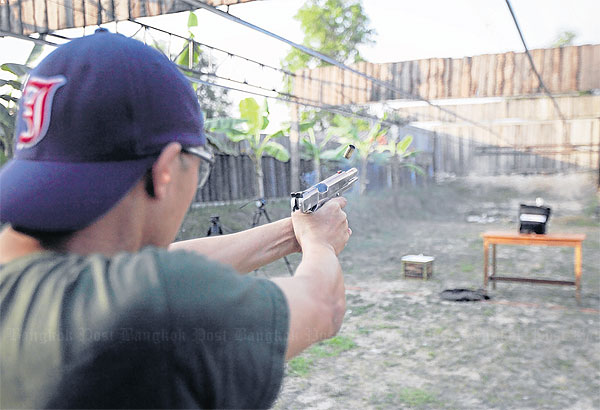 The Bangkok Post Sunday conducted tests with two types of body armour being sold to protesters for 700 baht - homemade cloth versions and manufactured Kevlar vests that were both lined with about 40 sheets of X-ray film on either side.

In the experiment at a private shooting range in Pathum Thani, the homemade version failed to stop a single bullet.

Shooter Somchai Cherdchai used 9mm and .45 ammunition from a range of distances, explaining that the hollow-tipped bullets were designed to cause maximum tissue damage. He expressed shock at how useless the vests were.

''It's scary. Anyone shot with this kind of bullet would be killed,'' he said.

The test simulated conditions using raw pork meat - experts confirm that pig tissue is physiologically closest to human tissue - wrapped within the vests. In each test, the vests were attached to 20kg of pork meat and were shot at by a professional shooter to ensure accuracy.

Even with the Kevlar version, the X-ray film proved ineffectual. For testing on the Kevlar vest, Somchai fired five .45 bullets from a distance of 15m. All five bullets were stopped by the 26th layer of X-ray film in the front panel.

''The bullets did not pierce the flesh, but the pork flesh was damaged,'' Somchai explained, adding, ''organs would be damaged by this kind of bullet''.

The final trial on the Kevlar vest with X-ray film tested close-range shots. Somchai fired successive .45 rounds from 7m away, and all five bullets penetrated the front panel of the vest and X-ray film, through the pork and lodged in the back layer of the vest.

''If you were shot several times with a bullet like this, you would be killed,'' he said.

Anan Jandontri, a former army volunteer from Pak Thong Chai in Nakhon Ratchasima province, sells Kevlar vests re-enforced with X-ray film to anti-government protestors in Bangkok. He said that he learned to make them during his time in the army, when he ''saw that many guards were shot. Many of them were severely injured and some of them died''.

Mr Anan claimed he tested his vests with ''a real M16'' against a stack of about 40 X-ray films. Nine bullets were shot from 20m away and all the bullets lodged in the 15th layer of film. ''Then we began to distribute this type of vest to frontline demonstrators,'' he said.

Mr Anan distributes the vests free of charge to some security guards, and for others he charges 700 baht. He said that he had given away some 100 vests and sold about 400.

Timothy Huxley, executive director of the International Institute for Strategic Studies (IISS) in Singapore, said ''there's an urban myth in Thailand that multiple layers of used X-ray film can provide protection against bullets''.

''The main attraction is that a supposedly protective jacket packed with X-ray film costs a fraction of proper Kevlar equipment,'' he said.

''Businesses have grown up around the protest sites hawking these X-ray jackets. The concern is that, if the situation descends into violence [tomorrow], many people who think they're protected will be much more vulnerable than they think.''

People's Democratic Reform Committee demonstrators began making and distributing the vests during mass rallies at the end of last month at three locations: Ratchadamnoen Avenue, around Government House and at Makkhawan Rangsan Bridge. Women usually gather with sewing machines while a group of male protestors cut and fasten the X-ray films together. The vests are not sold for money; they are distributed free and returned at the end of the day. Demonstrators are urged to donate cloth material and X-ray films directly to the distributors.

Brig Ben Barry, senior fellow for land warfare at the IISS in London, said that ''the X-ray sheets on their own don't provide much protection''. Instead of protecting against live ammunition, ''they might dissipate some of the blunt trauma and pain that can be inflicted by truncheons and rubber or plastic bullets'', he said.

''To protect against high-velocity bullets, such as those fired by rifles and machine guns at ranges of up to 600m that would still penetrate Kevlar, much harder, heavier and less flexible materials are required, such as hardened steel or ceramics.''

Mr Huxley said, ''The test confirms pretty conclusively that even when combined with Kevlar, the X-rays provide little or no protection against shots from the most likely type of weapon.'' 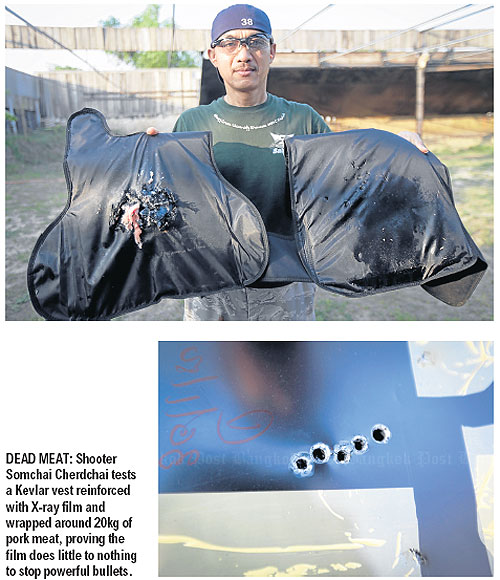