Prayuth says soldiers not yet ready to step in

The army has raised the alert over the possibility of more violence at anti-government protests after intelligence found weapons and explosives are being moved into Bangkok. 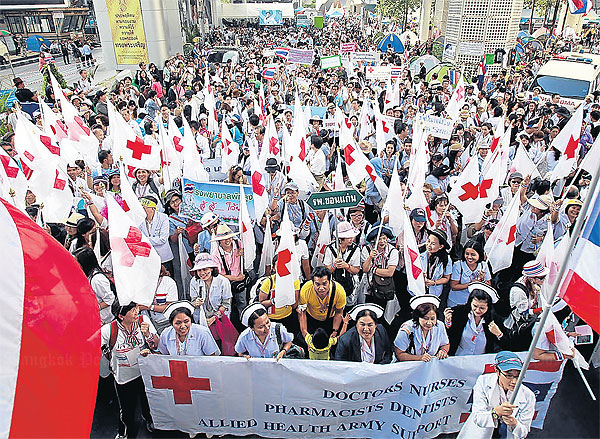 Health professionals from several hospitals and organisations including Siriraj, Chulalongkorn and Ramathibodi hospitals, and the Rural Doctors Society and National Health Commission Office, gather at Pathumwan intersection and march to the Asok rally site to demand the government delay the Feb 2 election and pave the way for political reform. PAWAT LAOPAISARNTAKSIN

The army did not identify any specific groups involved in stocking up arms or their targets.

"An ill-intentioned group is mobilising weapons and bombs to stir up violence and attack its rivals," army spokesman Winthai Suwaree said yesterday, without giving any details.

It is believed powerful weapons are being smuggled with the intention of doing harm amid Bangkok's volatile political situation, he said.

The warning has raised further concerns over the political conflict, which is turning increasingly violent.

The People's Democratic Reform Committee (PDRC) was targeted on Friday and Sunday with two grenade attacks.

On Friday, one PDRC supporter was killed and 39 others wounded after a grenade was thrown into a throng of protesters while they marched on Banthat Thong Road as part of the protest group's "Bangkok shutdown" campaign.

On Sunday, 28 people were injured by a grenade thrown behind the rally stage at the Victory Monument.

PDRC supporters have accused the government and red-shirt United Front for Democracy Against Dictatorship (UDD) of being behind both attacks.

But pro-government supporters and the red shirts have responded, saying the attacks were set-up by the PDRC and military officers to stir up anti-government sentiment.

Col Winthai yesterday called on both sides to stop pointing the finger at each other and give police time to find the real culprits, to stop them instigating further violence.

According to initial investigations, the grenades used in both attacks were the same type _ the RGD-5 made in Russia and China _ Col Winthai said. Police have records of people in possession of this type of grenade, he said.

The army will continue to support the police-led Centre for the Administration of Peace and Order in tightening security measures. More joint army-police checkpoints would be set up.

Army chief Prayuth Chan-ocha said yesterday it was apparent that a group of people wanted to use violence to solve problems related to the ongoing political situation. However, soldiers will not come out to help oversee peace.

The grenade attacks have spurred renewed calls for the army to get involved, and some people have begun accusing it of not being active enough.

"The situation has not yet escalated to the point where we must get involved," Gen Prayuth said, calling on the public to understand the scope of the army's duties.

Whether soldiers will come out depends on the degree of violence. The overall situation is still under control, he said.

The present situation is different from that in 2010, he said.

The military was ordered to disperse the rally of the pro-Thaksin Shinawatra UDD, which was demanding that the prime minister at the time, Abhisit Vejjajiva, step down.

At that time, attackers shot at people and state officials, he said.

"Society must be able to differentiate between these events. Don't accuse me of not working," Gen Prayuth said.

"All soldiers are ready to sacrifice themselves when the time comes."

Referring to the recent grenade attacks, Gen Prayuth called on the public to let police do their job of investigating the crimes, instead of rushing to conclusions over who was behind the attacks.

The army chief said he had talked to national police chief Pol Gen Adul Saengsingkaew and asked that he keep an eye on the progress of the cases and provide answers for the public as soon as possible.

Col Winthai also played down a new round of speculation over a coup yesterday after some members of the public saw armoured vehicles at the 11th Infantry Regiment in Bang Khen. The vehicles were brought to Bangkok for use in a parade marking Army Day on Saturday.

Col Winthai said the BTR-3E1 armoured vehicles were held back for other military units to study and use for training purposes.

Other armaments, including tanks, have been transported back to their bases upcountry.

An army source said that besides training purposes, the armoured vehicles are being kept in Bangkok to prepare for the possibility of more violence in which heavy weapons such as rocket-propelled grenades and other explosive devices could be used.