People involved in the recent grenade attacks on protesters at Banthat Thong Road and the Victory Monument are probably the same group who instigated violence during the 2010 political unrest, the commander of the Royal Thai Navy's elite Seal (Sea, Air Land) forces said on Tuesday. 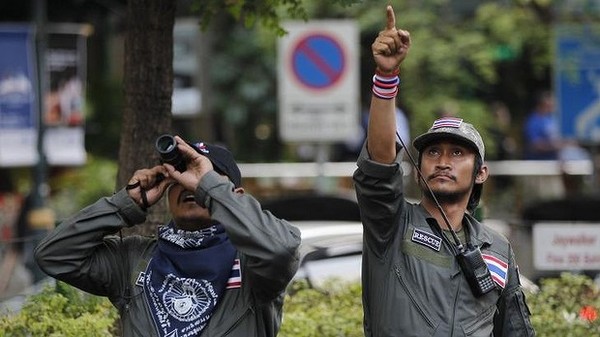 Actions and appearance of "security guards" of the People's Democratic Reform Committee (PDRC) protest have raised questions about whether some are members of the elite SEAL teams of the Royal Thai Navy. (AP Photo)

His comments were strongly denied by red-shirt leaders who demanded he provide proof to back his words.

Rear Admiral Winai Klom-in also said he had received intelligence reports that "foreigners" from across the eastern border were transported on Monday in 10 passenger vans in order to instigate violence in Bangkok.

He asked why police with their extensive network of information had no knowledge of these movements.

"Just stop doing this. Those who brought in foreigners to kill Thais should not have been born in Thailand," R Adm Winai said.

"There are many police around, but why can't they arrest anyone?" he said.

Rear Adm Winai said he had evidence that during the 2010 political violence, 39 members of "a foreign force" were shot dead during the clashes with security officers and red-shirt protesters had used a refrigerated lorry to remove their bodies from the scene.

When asked if the caretaker government would invoke the emergency decree and order the military to deal with the protesters, he said if he is ordered to do bad things, he will refuse.

Rear Adm Winai denied allegations that three members of a Seal team were linked to the recent bomb attacks on the anti-government protesters, as pictures of the perpetrators were released on social networks.

He said the three Seals were not involved as they were at Sattahip naval base when the incidents happened.

Rear Adm Winai suspected their pictures were released by police to deflect blame and try to discredit the military. The pictures were intended only for use by the police, he said, adding that the navy is considering filing a lawsuit against the police force.

He said he has now ordered six of the Seals to withdraw from the protest sites to return to their base at Koh Samae San in Chon Buri.

"But we're ready to go there again if we need to look after the people," he said.

He said he made his own decision to send the Seals to protect the people and army chief Prayuth Chan-ocha did not order him to do so.

Responding to Rear Adm Winai's comments, United Front for Democracy against Dictatorship (UDD) co-leader Arisman Pongruangrong insisted there were no "men in black " during the red-shirt protests in 2010.

It was the Abhisit Vejjajiva government, in power at the time, that tried to falsely accuse the red shirts, he said.

Mr Arisman said if the navy officer has no proof, he must be responsible for what he said.

Weng Tojirakan, another UDD co-leader, said the UDD had nothing to do with the so-called men in black. 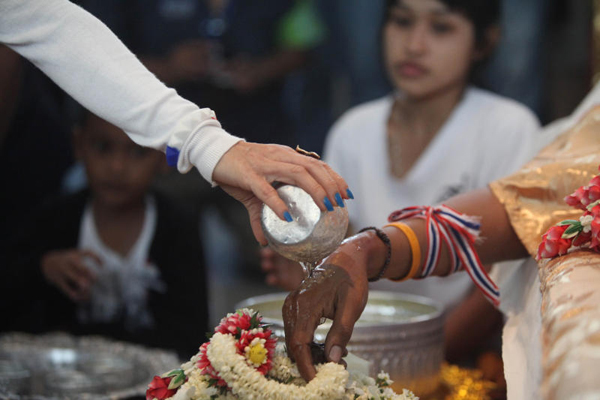 A fellow protester pours water over a hand of Prakrong Choochan, who was killed when a grenade was thrown at anti-government protesters on Banthat Thong Road on Friday, Jan 17, 2014 during a bathing rite. (Photo by Seksan Rojjanametakun)