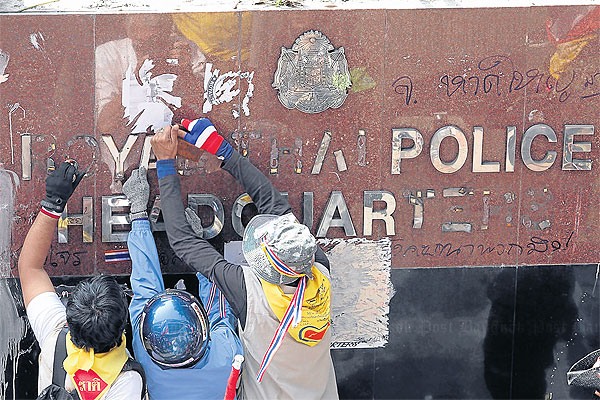 Demonstrators led by the Network of Students and People for Reform of Thailand deface the sign on the front of the Royal Thai Police Office headquarters yesterday. APICHART JINAKUL

"Whenever conflicts become violent and insoluble, the military will have to solve them. We will do our best to take care of the nation and use the right methods," he said.

He warned that some groups were using illegal and violent methods to stir up unrest but they would not succeed.

"I condemn these people. I have some information about who they are. I repeat my warning that they must not [use violence] again. We are gathering evidence so police can take legal action," Gen Prayuth said.

He is aware that a small group of protesters are taking actions to pressure authorities but he said they were not the group that used violent means.

Gen Prayuth said many groups of people are speaking forcefully on radio stations, threatening government officials and mobilising their people to trigger clashes. He viewed those actions as unlawful and demanded the government take action against those groups.

The army chief refused to comment on the necessity of the government's decision to exercise the emergency decree in Bangkok and nearby provinces to cope with protesters.

He said the government had made the decision, the national police chief continued to take charge of responses to demonstrators and the military only played supportive roles.

Gen Prayuth said 40 companies of soldiers are operating more than 30 checkpoints together with police, and manning over 20 checkpoints of their own. The 1st Army is responsible for military assistance in the peacekeeping operations of the police.

He said soldiers were deployed to ensure the safety of people on all sides, not those of any particular side.

Gen Prayuth said the army was proposing its plans to the government's Centre for Peacekeeping . Soldiers had to be deployed at many locations to prevent violence breaking out between protesters and police.

"We are not neglecting our duties. Soldiers are working but today we must adhere to regulations and carefully consider our actions and stances," Gen Prayuth said.