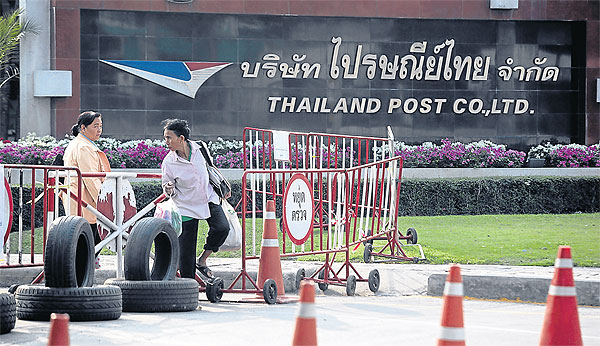 Passersby walk through barricades in front of Thailand Post Co on Chaeng Watthana Road yesterday. The state enterprise has stopped delivering ballot papers to polling stations because of the antigovernmentprotests. PATTANAPONG HIRUNARD

According to the letter, People's Democratic Reform Committee (PDRC) protesters on Tuesday blocked the entrances to Thailand Post Co on Chaeng Watthana Road and several post offices after demonstrators learned the state enterprise was handling the delivery of the ballot papers.

Protesters had threatened to disrupt water and water supplies to Thailand Post Co as well as its delivery operations if the firm continued to deliver the ballot papers, the letter said.

Thailand Post Co had decided it could no longer support the EC's work in the election, the letter said.

The centre is the ballot paper distribution hub for the upper southern provinces of Chumphon, Ranong, Surat Thani, Phangnga and Phuket.

Centre chief Sombat Nupak said he would discuss with EC officials in five provinces as to whether they will come to pick up the ballot papers.

PDRC Chumphon chapter leader Krit Kaewrak said most people in the province disagreed with holding an election before national reform, so they do not want the ballot papers distributed.

Mr Krit said he knew the ballot papers for the advance polls set for this Sunday had been sent to Chumphon police station, so he wanted the police to return them to the central EC office.

Mr Puchong said 15 provincial offices of the EC in the South remain shut as a result of protests. Only the Yala, Pattani and Narathiwat offices are open, he said.

Of 140,000 EC staff needed to take care of the southern poll, only 50,000 have been sought and the agency is now searching for more, he said.

In Songkhla, about 300 PDRC protesters blocked entry to the 43rd border police camp in Muang district as the venue will be used as a polling station for advance voting on Sunday.

The protesters, however, allowed Mr Somchai to enter the camp to hold talks with EC provincial officials there.

An EC chief in Songkhla told Mr Somchai he was worried violence could occur on Sunday.

At the meeting with the six representatives of the PDRC protesters later, Mr Somchai said: "The election is not a sacred thing. It can be deferred if it is unable to be organised."

After Mr Somchai left the camp, the protesters broke through the defences and besieged the venue.

The office had to move three times due to protests and two panels handling the election had stepped down, he said.

Mr Bantheng said he believed the protesters will block entry to a border patrol police camp where advance voting will be held on Sunday. A shortage of EC staff is also critical and it is likely many of them will resign, he said.

Wachara gets jail term for defamation