Suthep pushes 'only chance' for reform

As anti-government protest leader Suthep Thaugsuban continues his fight against the so-called "Thaksin regime", he expresses his doubts - and conveys his optimism - about the People's Democratic Reform Committee's campaign to reform the nation. NAOWARAT SUKSAMRAN and PRADIT RUANGDIT spoke to Mr Suthep. 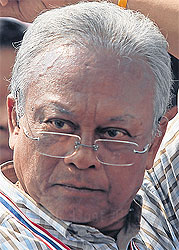 How does the PDRC plan its fight from now on?

The government of Ms Yingluck Shinawatra will try to hold an election this Sunday. The Pheu Thai Party may win more than 400 House seats because this election, in fact, has Pheu Thai as the only actual contender. Other political parties play supporting roles and they can transfer their votes to one another.

If Pheu Thai wins a decisive amount of seats, it can use the election to claim its legitimacy to continue with national administration. The PDRC sees this as the only opportunity to reform the nation. We are campaigning for national reform before an election. We will have another huge campaign before polling on Sunday. We may campaign in front of polling units but we will not block the election. Voters may find it difficult to enter polling units. The main objective of the PDRC is to prevent the government from proceeding with this election.

How will the PDRC respond as the Constitution Court ruled the election can be postponed and the Election Commission and the government will discuss the possibility of a postponement?

A postponement of one year or one year and a half will do. The caretaker Yingluck government will resign to pave the way for an interim government and a legislative assembly to conduct reform.

Has Thaksin Shinawatra or the government sent any representative to negotiate with the PDRC?

There have been attempts to send some people, including a high-ranking military officer, to negotiate but the only decision maker is Pol Lt Col Thaksin Shinawatra.

Are government officials still the determining factor of the PDRC's fight?

Many government officials have sided with the people, but they remain reluctant to show up. After health officials, staff members of the Royal Irrigation Department led by ex-irrigation director-general Pramote Maiklad turned up.

I am confident that more government officials will come out.

However, I am happy with the armed forces as they reject the plan of the government to use them as its tools and they announce they will guarantee public safety. I insist we do not want soldiers to stage a coup. We want a national reform by people. Thaksin and the government want the military to stage a coup so that they will have an excuse to protect their power.

How does the PDRC expect the Yingluck government to respond?

Is the PDRC concerned about any possible violence?

We are seriously worried about violent attacks by foreign armed men. I coped with them in 2010. Soldiers' posts were attacked. We know they are professionals. However, I am glad the military are alert. Those who are patriots will not let any party use armed foreign forces to kill Thai people.

How long do you think it will take to topple the Thaksin regime?

I dare not predict that, but I strongly believe people no longer care about how long it will take. What they want is the end of the Thaksin regime and national reform before the next election.