A group of 194 academics, former cabinet ministers, community leaders, business figures, civil servants, members of the media and writers and artists have set up a network to push for reform through peaceful means. 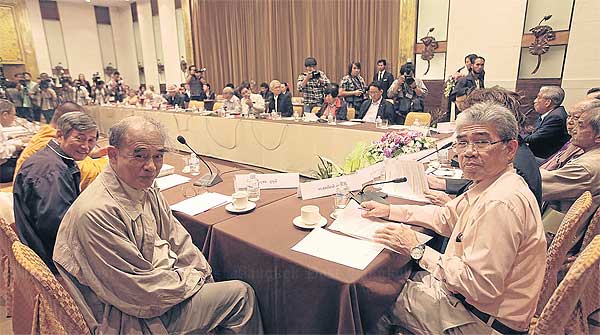 Prominent academic Thirayuth Boonmi yesterday announced the formation of the Network of Servants for Reform through Peaceful Means.

The education system is inefficient and media organisations use freedom of expression irresponsibly, which has contributed to social divisions, he said.

In light of this, he said people from all sectors feel the need to unite to push for reform, adding the network is not the same as reform councils that have been proposed previously. He also encouraged more people from all walks of life to take part in the network.

Those who join the network already have agreed the political sector is a problem in itself and politicians no longer have the legitimacy to undertake reform, he said. The network's urgent tasks are to reform laws to tackle corruption, reform the political structure to allow decentralisation, and narrow the income gap between people in rural areas and those in major cities.

The network will also aim to reform the judicial system, improve the checks-and-balances system and push for social reform to empower citizens in the fields of education, mass media, healthcare and the environment.

Unlimited greed and arbitrary power have led the country into an absolute catastrophe, Mr Thirayuth said.

The political system, checks and balances, the bureaucratic structure and healthy relations between the people, businessman and civil servants have now crumbled.

"The last thing which has already started to collapse is morality and ethics as killings and violence now take place on the streets but many people appear to be indifferent, which is very worrying," Mr Thirayuth said.

He said members of the network consider themselves "social servants", equivalent to public servants. The network will link to anti-corruption organisations to work out measures to reduce social disparity, promote understanding between local communities and support networks of local communities to press for reform.

"I am friends with all sides, including the candle-lighting white-shirt group or other political groups, but I am not friends with the Thaksin regime," he said, referring to the influence of ousted premier Thaksin Shinawatra on Thai politics.

Academic Meechai Ruchupan did not join the group but said in his letter that he threw his support behind the move.

He agreed Thailand is now in urgent need of reform, as laws are not effectively enforced by those in power.

"It is encouraging, and a good start, that people from several sectors have decided to join together to push for reform of the country this time," he said.

Vorawan Tarapoom, chief executive of Bualuang Asset Management, said the business sector is also partly to blame as it wrongly believed it should not be involved in politics.