Meechai calls on public to vote in poll
Thailand
Politics

Meechai calls on public to vote in poll

Prominent legal expert Meechai Ruchupan has encouraged Thai voters, particularity opponents of the government, to exercise their right to vote in Sunday's general election, saying voting "no" will help prevent bad politicians from being elected. 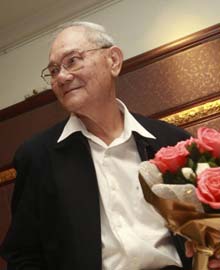 Meechai Ruchupan: Opponents of the government should exercise their right to vote on Feb 2. (Bangkok Post file photo)

He suggested that it is best for opponents of the caretaker government to "vote no" to show their disapproval of the government rather than refusing to go to the polls.

Mr Meechai, who is also a member of a Council of State panel, expressed his opinions in an article entitled "Should we go to vote?".

He said social media campaigns have been launched suggesting that if the voter turnout is less than 50%, Sunday's election will become null and void.

Mr Meechai said this is a misunderstanding because even if the turnout is only 10%, the poll is still legally valid.

Whether the election is made invalid does not depend on the number of voters. but on whether or not it can be held nationwide on a fixed day, he explained.

The caretaker government and the Election Commission (EC) must know this but it appears they have still not discussed the matter seriously. If the poll cannot take place nationwide on Sunday, the government and the EC must take responsibility and they could both risk having criminal and civil suits being levelled against them, Mr Meechai said.

If there are many no-shows at the poll, the outcome of the election could be interpreted in a way that suggests that 100% or nearly 100% of voters support the government, Mr Meechai said.

But those who disagree with the government could tick the ``vote no'' box to show their disapproval.

In constituencies with a lone candidate, it is even more necessary for them to go to the polls to oppose that candidate by voting ``no''.

To win a seat, the candidate must win at least 20% of the number of registered voters and get more votes than the "vote no" number.

Voting "no", therefore, is a way to prevent bad politicians from getting elected, Mr Meechai said.

Mr Meechai also said that those who disagree with the government should go out to vote to show that they do not oppose the election but they want poll rules to be reformed to ensure elections are fair and free of corruption.