Voting in the national election ended at 3pm Sunday, but with a raft of provinces experiencing difficulties, the Election Commission (EC) still has a lot to tackle before an official result can be announced. 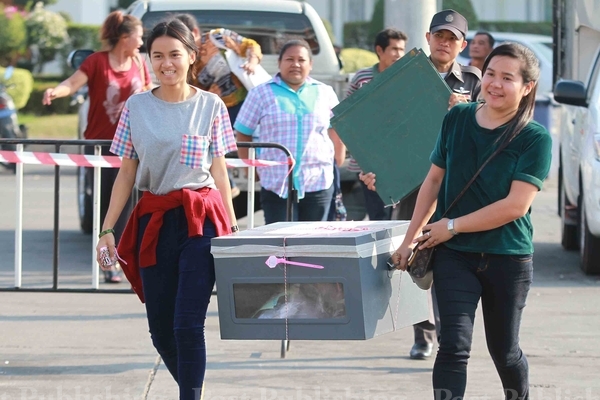 Election officials return a ballot box to the provincial hall in Samut Prakan province on Sunday after the ballots were counted at their polling station. (Photo by Somchai Poomlard)

Voting went ahead in 89% of 93,952 polling stations across the country, the EC concluded after the polls closed at 3pm.

Not all provinces were able to take part in the election. Most of those which missed out were in the South.

Vote counting was completed at other polling stations but the official results will not be announced as advance voting had yet to be concluded, EC chairman Supachai Somcharoen said.

The new round for advance voting has been scheduled for Feb 23.

The EC cancelled the poll in all stations in nine of 14 provinces in the South. The provinces of Songkhla, Trang, Phatthalung, Phuket, Surat Thani, Ranong, Krabi, Chumphon and Phangnga had no voting at all.

They did not have constituency candidates, no party-list ballot papers and no officials to man the polling stations, EC secretary-general Puchong Nuttrawong said earlier.

Another nine provinces, including Bangkok, were able to open polling booths in some or most areas - Narathiwat, Pattani, Yala, Nakhon Si Thammarat, Satun, Prachuap Khiri Khan, Rayong and Phetchaburi provinces.

The EC found no problems in 59 provinces, including all 16 in the North and 20 in the Northeast.

Caretaker Prime Minister Yingluck Shinawatra said at the end of voting that she was satisfied with the election and thanked officials and people who came out to vote. The election was the starting point to solving problems through the democratic process, she added.

The caretaker government was ready to support the new rounds of elections, she said.