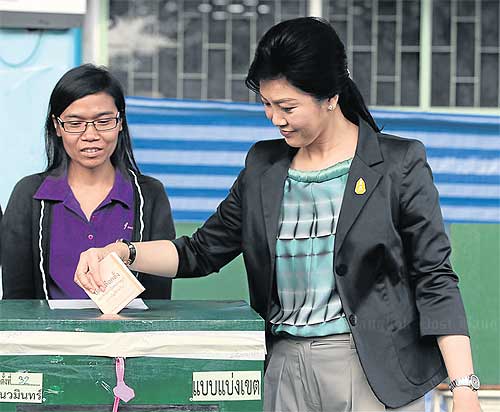 Caretaker Prime Minister Yingluck Shinawatra drops a ballot paper into the wrong box as she casts her vote at Klong Lamjeak School, Bung Kum district. She was shown the wrong box by an official. CHANAT KATANYU

Ms Yingluck arrived the polling station at Khlong Lamchiak School in Bung Kum district at 8.10am to cast her vote.

Ms Yingluck later told reporters the mishap had occurred because the officials' instructions were wrong.

She informed the Election Commission of the mistake.

Videos of the incident show Ms Yingluck asking officials where to drop her orange ballot paper. They then pointed at the box for constituency voting.

There were already several orange ballot papers in the wrong box before Ms Yingluck deposited her vote.

Officials who told Ms Yingluck to drop her ballot in the wrong box were not to blame, he said.