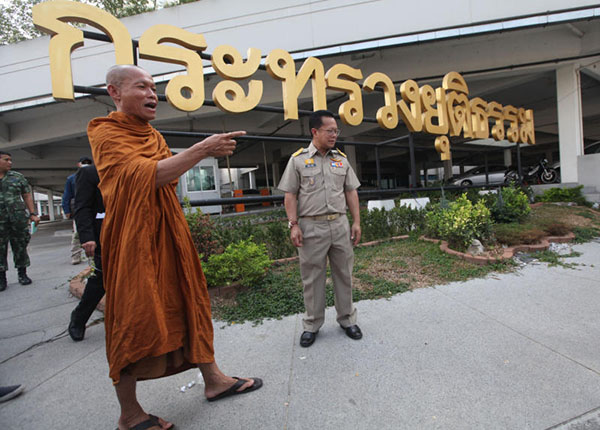 Protest co-leader Luang Pu Buddha Issara has been leading the PDRC rally stage at the government complex on Chaneg Wattana Road. He agreed to relax blockades to ease the impact on state officials and motorists following a three-hour meeting with Tawatchai Thaikhaew, deputy permanent secretary of the Justice Ministry, and army representatives at the protest site on Monday afternoon. (Photo by Seksan Rojjanametakul)

The office said the senior monk and People's Democratic Reform Committee (PDRC) leader had violated Buddhist discipline by breaking the law. He is wanted by the Department of Special Investigation on charges of insurrection.

Director-general Nopparat Benjawatananun said the National Office of Buddhism had sent a letter to the Nakhon Pathom order, to which Buddha Issara belongs, summoning him for an official warning following the violent clash in Bangkok's Laksi area on Saturday involving unidentified attackers and PDRC protesters.

Buddha Issara has been leading the PDRC protest stage at the nearby government complex on Chaneg Wattana Road. Some government agencies, including the Justice Ministry, were allowed to get back to work on Tuesday, following negotiations with the senior monk.

Mr Nopparat said joining a protest is a breach of Buddhist discipline.

The National Office of Buddhism has contacted the Nakhon Pathom governor, also advising further action against the the monk.

The order concluded that Buddha Issara had breached the discipline of the Sangha Supreme Council for joining protests and encouraging people to break the law.

Now that the Department of Special Investigation had summoned him to answer to a charge of insurrection, Buddha Issara had violated both secular and Buddhist law, he said.

A monk who has broken criminal law can be ejected from the monkhood after being arrested and denied bail, Mr Nopparat said.

Asked why Buddha Issara had not been arrested, Mr Nopparat said it was up to the police, who must act on evidence, including witness testimony.

The police filed an arrest warrant for the monk for obstructing the Jan 26 advance poll and Feb 2 general elections after he led protesters to surround Laksi district office.

His acts prevented voters from entering polling stations on Jan 26 and barred officials from distributing ballot boxes to election units on Feb 1, resulting in the elections being cancelled on both days, the police said.

But the monk shrugged off the National Office of Buddhism’s comments on Tuesday, saying the office has no mandate to defrock him.

Citing the constitutional right to assemble, he said the charter is the highest law of the land.

He also claimed that a Ratchaburi politician had placed a 20-million-baht bounty on him and that thugs were sent to discredit him and the PDRC rallies.

Buddha Issara is also the subject of a complaint by the Buddhist Association of Thailand, a non-government organisation.

"Monks can have personal feelings but political expression is banned by Sangha regulations," said the association's secretary Sathien Wipornmaha. He said Buddha Issara's involvement in anti-government protests "destroys the image of Buddhism".

The controversy surrounding Buddha Issara's activities has not dimmed his appeal to supporters, some of whom have followed him to Bangkok from Wat Or Noi in adjoining Nakhon Pathom province, where he is a respected senior monk.

The five-baht reduction of the diesel excise tax will relieve pressure on logistics and transport costs after diesel prices exceeded 30 baht a litre starting earlier this month, says the Land Transport Federation of Thailand (LTFT).

WASHINGTON: An increasing number of unidentified flying objects have been reported in the sky over the past 20 years, a top US defense official told lawmakers Tuesday in the first public hearing on UFOs in half a century.