Two grenades were fired at the anti-government rally site on Chaeng Watthana Road last night. No injuries were reported. 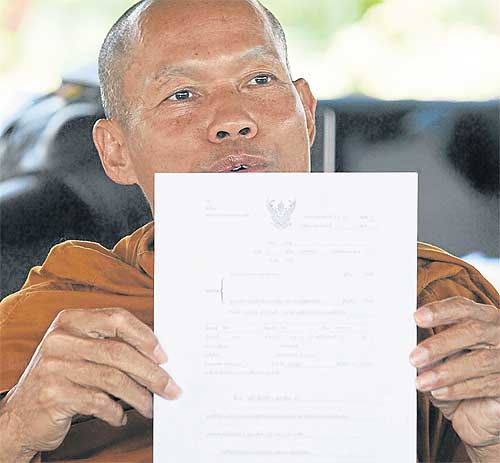 Anti-government leader Luang Pu Buddha Issara shows a letter of appeal against the Criminal Court’s decision to approve an arrest warrant for him. APICHIT JINAKUL

One grenade was believed to have been fired from a flyover at a medical tent and another one at the women's toilets nearby, eyewitnesses said. The incidents took place at 8.26pm.

The site of the People's Democratic Reform Committee (PRDC) on the road is under the leadership of monk Luang Pu Buddha Issara.

It was the first time that the Chaeng Watthana stage has been attacked with grenades. The Lat Phrao stage came under grenade fire last week, prompting anti-government leaders to close it down along with another one at the Victory Monument.

The attack came hours after the Criminal Court approved a warrant for the arrest of Luang Pu Buddha Issara for allegedly obstructing advance voting on Jan 26.

The request for a warrant was filed by Pol Col Pong Sangmurin, chief of Thung Song Hong police station.

Payap Haopramong, a lawyer representing Luang Pu, said the monk will appeal against the warrant.

Mr Payap said the warrant was unnecessary because the monk posed no flight risk.

Luang Pu had met Thung Song Hong police earlier after being charged in connection with the protest.

The monk denied any wrongdoing, saying he did not blockade or trespass into the government office that was used as a polling station on the weekend. It was state officials who locked up the office, he said.

Meanwhile, Election Commission (EC) member Somchai Srisuthiyakorn said the PDRC and the EC have reached an agreement to allow 1,800 staff members from the EC to enter the government complex on Chaeng Watthana Road, now only partially occupied by protesters, and resume their work from today.

However, staff must leave the office at 4pm each day for security reasons, he said.

The Department of Special Investigation (DSI), meanwhile, has stopped negotiating with the monk to reclaim its office at the same complex.

Police have sought an arrest warrant for the monk. It would be improper for the DSI officials to meet the monk now, said Pol Lt Col Thawal Mangkhang, a special case expert at the DSI.