Laksi shooter is 'man in black'

Protesters believe the man who fired a gun hidden in a popcorn bag, reportedly to protect protesters during the Laksi shoot-out, is a military man. 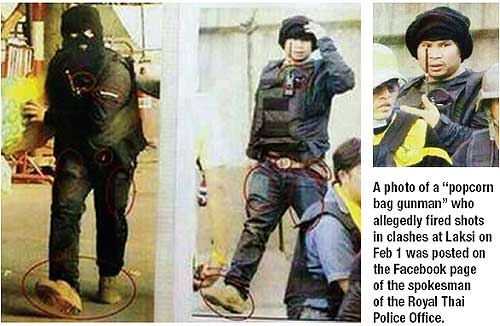 The assumption was made by People's Democratic Reform Committee co-leader Issara Somchai based on his first-hand account of the pre-poll violence on Feb 1.

His explanation corresponds with comments given earlier by PDRC secretary-general Suthep Thaugsuban who insisted the man was not a PDRC guard as some believed.

Mr Issara, who was near the Laksi intersection that day, has talked to many people who told him the man in black was probably a "soldier coming to help''.

He does not know how many so-called ''men in black'' were there during the incident.

The gunman was seen at the intersection while Mr Issara's group went there to help Luang Pu Buddha Issara and his supporters block the transport of ballots at Laksi district office.

Mr Issara said he went to Laksi immediately after learning Pathum Thani hardline red-shirt leader Wuthipong Kachatham, known as Ko Tee, would lead his supporters to help district officials take the ballots out of the office.

He said his group was sprayed with gunfire as it approached the intersection.

The attackers fired from taxis and hurled ping-pong bombs and giant firecrackers from the tollway.

Mr Issara said some of his supporters who carried pistols were forced to fight back out of fear for their lives, he added.

The situation began to calm down after soldiers from the 11th Infantry Regiment in Bang Khen moved in to help evacuate some 30 people and journalists caught in the crossfire at the intersection.

At least six people including two journalists were injured during the melee.

After the violent clash in Laksi, the PDRC decided to close its rally site at the Lat Phrao intersection and merged it with another protest venue at Lumpini Park.

The PDRC leaders insisted the merger was for the better protection of the protesters.

The Lat Phrao site located close to the main road junction was the location of the weapon attacks.

Mr Issara said the protest leaders who previously supervised the Lat Phrao site wanted to revive the Lat Phrao stage partly because the site is closer to their homes. Many protesters also feel a sense of kinship with the site.

Mr Issara admitted the most important reason the leaders wanted the Lat Phrao stage revived is because they felt defeated dissolving the rally venue.

"Many people came and spent many nights at the Lat Phrao rally site. They fought hard together and that is where they started coming to the protest,'' he said.

Mr Issara said a certain sense of belonging was lost when they moved from the area where they originally joined the protest. "It was like abandoning your station.''

He told the PDRC supporters at the rally that despite the violent encounters at the protest, the anti-government movement is not slowing down.

Meanwhile, police are also trying identify who the man in black was.

The Royal Thai Police Office has released photographs of a man wearing a black hood and black uniform, holding a gun in a popcorn bag. In another image, he has the hood rolled up, exposing his face to cameras.

The Royal Thai Police Office said in a message posted along with the pictures on its Facebook page that they believe the man fired the gun hidden in the popcorn bag at Lak Si Intersection. It urged members of the public who had information about the man to help identify him.

Police spokesman Pol Maj Gen Piya Uthayo said police investigators are collecting information about this person and will use it to ask the court to issue a warrant for his arrest.