The Centre for Maintaining Peace and Order’s (CMPO) efforts to cut the financial lifeline of anti-government protesters could backfire if it releases the names of the financiers without substantive proof. 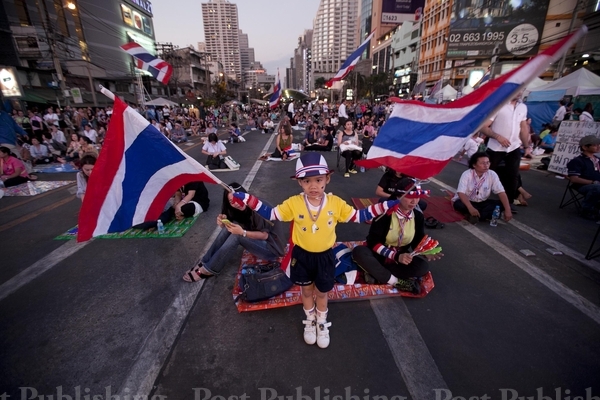 Some of those accused of providing financial aid to the People’s Democratic Reform Committee (PDRC) have threatened to sue the CMPO for defamation if the government fails to produce sufficient evidence to back its accusations.

The CMPO on Tuesday decided to postpone publicly naming 136 companies and individuals it says have served as "feeder pipes" in providing financial aid for PDRC activities.

The centre agreed to assign five agencies, the Anti-Money Laundering Office (Amlo), the Royal Thai Police Office, the Department of Special Investigation (DSI), the Office of the Narcotics Control Board, and the Revenue Department to look at the 136 names again before a complete list could be revealed to the public.

However, some of the names have reportedly been leaked, although it has not been confirmed they are actually on the list.

The Post Today newspaper yesterday published what it says was a list of 32 of the movement’s backers.

Amlo chief Seehanat Prayoonrat said the CMPO has appointed a working group to investigate exactly who is funding the movement.

A source on a DSI panel examining the names said the CMPO could risk lawsuits if claims against those accused of providing financial aid to the PDRC are proved false.

The agencies involved in the case could face prosecution under Section 157 of the Criminal Code, which deals with malfeasance and dereliction of duty by officials.

This could be the reason why the CMPO decided not to name the PDRC’s financiers, the source noted.

The source explained the CMPO has resorted to Section 24 of the DSI’s special cases law to give it the legal muscle to deal with the suspected PDRC financiers and stop the flow of funds.

Under this law, authorities can search houses or buildings suspected to be hideouts of suspects involved in special cases. They can search these locations and a suspect’s vehicles for assets.

The law also allows authorities to question financial institutions, government agencies, state enterprises and individuals, or write to them to ask for information.

However, the source said, Section 24 does not provide for any legal measures against the PDRC’s "feeder pipes", nor does it authorise the CMPO to freeze the bank accounts of PDRC co-leaders, which means the PDRC leaders could file suits against the CMPO, the source said.

If the law is enforced to freeze and seize the assets of alleged financiers, the CMPO must be sure it has enough evidence and give the accused the opportunity to defend themselves.

But the CMPO must be ready for any legal repercussions if the accused are proven innocent, the source said.

National Security Council chief Paradorn Pattanatabut, a CMPO committee member, yesterday admitted that efforts to cut the financial lifeline of the protesters could have adverse consequences for the government.

He said the five agencies assigned to handle the case must be careful before releasing the list of financiers.

If their information is not clear, the tactic could backfire, he said, adding that some of the leaked names may not be correct.

Boonchai Chokwatana, the president and chief executive of Saha Pathanapibul Plc, the distributing arm of Saha Group, the country’s largest consumer products conglomerate, yesterday brushed aside reports that his company was one of the PDRC’s backers. He said he was neither alarmed nor surprised, and that he had known about it for two weeks.

Mr Boonchai said his company has nothing to do with politics and does business transparently, although the firm may sometimes be affected by politics. His family does not take sides and remains neutral, he said.

He added that the CMPO’s efforts to stop the flow of funds to the PDRC and to name the PDRC's financiers, which may include his company, may be only an attempt to deter and intimidate them from backing the PDRC.

He said he did not think the CMPO is serious about prosecuting alleged financiers.

On the contrary, the measure is a flawed strategy and could have negative consequences for the government, Mr Boonchai said.

The CMPO should halt this move as the suspected companies may actually decide as a consequence to provide financial support to anti-government protesters.

Pramon Sutivong, chairman of the Anti-Corruption Organisation of Thailand, yesterday dismissed reports that he is a PDRC financier.

He said he had learnt through the media that he has been named as a financier, but denied that was true.

He said if his name appears on the official CMPO list of financiers, he and others who have been wrongly accused will sue for defamation.