Govt admits tourists are scared away

The Tourism and Sports Ministry on Wednesday admitted the emergency decree in Bangkok and surrounding provinces has scared away tourists. 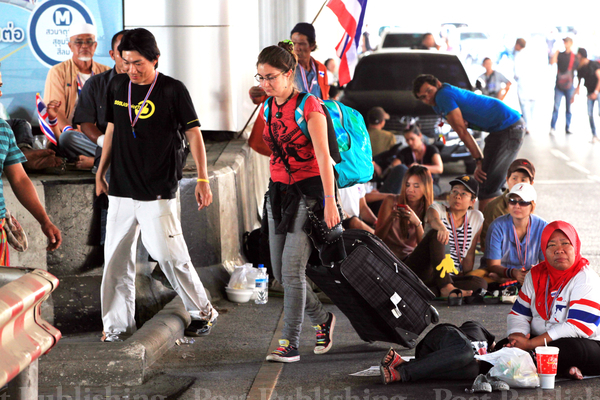 A foreign tourist commute by train at Phaya Thai station on Feb 2, 2014. (Photo by Kitja Apichonrojarek)

However, the ministry remained optimistic it will still be able to increase income from the tourism sector.

Caretaker Tourism and Sports Minister Somsak Phurisisak told a cabinet meeting yesterday the decree has scared off potential tourists, especially those intending to visit areas in the capital currently affected by the political rallies.

The minister, however, said he was confident the 2.2 trillion baht in tourism income forecast for this year, which is slightly higher than last year, will still be achieved despite the political unrest.

Tourism officials from Hokkaido in Japan, for instance, had decided to delay a planned visit to Thailand despite being assured by their Thai counterparts that Thailand was still safe for tourists, Mr Somsak said.

He recently returned from a visit to Hokkaido to try and increase visitors numbers to the country under a Thai-Japanese tourism promotion scheme.

Since the country serves as a tourist transit hub for several Asean countries, the political unrest was not only taking its toll on Thailand but also on other tourist destinations in the region such as Laos and Cambodia, Mr Somsak said.

The Tourism Authority of Thailand (TAT) was looking at ways to boost tourism such as turning to potential tourists in other markets.

The TAT is working together with the Foreign Ministry and tour operators to reassure these potential tourists that Thailand is still a safe destination for them to visit, he said.

Despite a drop in foreign visitors to Thailand last month and over the Chinese New Year festival, the TAT still expects to see a recovery in the third and final quarters of this year, he said.

The drop was attributed to a decline in the number of tourists from Asia which is expected to recover more quickly than other markets, he said.

The TAT is looking at how to increase tourism from China, Japan and Russia so it could achieve its planned tourism income generation target for the year, Mr Somsak said.