AIS urges users to check facts before hanging up

Advanced Info Service has asked its customers to carefully consider the facts before cancelling their services as part of an anti-government protest.

The country's largest mobile phone operator made the plea on Saturday in a text message sent to its nearly 40 million subscribers.

Some of those subscribers were already lining up at AIS counters in the capital to cancel their services. Details on the number of cancellations were not immediately available.

AIS reiterated that it had no connection to exiled former premier Thaksin Shinawatra and that calls to boycott its services on such grounds were unjustified.

As well, it said, a consumer boycott would only end up hurting the company's thousands of workers and their families.

Suthep Thaugsuban, the leader of the People's Democratic Reform Committee (PDRC), has urged his supporters to break their AIS SIM cards as a symbolic gesture of ending support for the company that Thaksin founded.

AIS CEO Wichian Mektrakarn was quick to respond with a statement asking customers to think twice.

"We beg you to be compassionate in the wake of the current situation," he said in the SMS. "I am deeply concerned about what happened and would like you to understand that our company takes no political side and the Shinawatra family does not own any share in the company.

"We have almost 10,000 employees whose families depend on them. We therefore ask you to be sympathetic to these employees who are determined to provide the best services to all Thais." 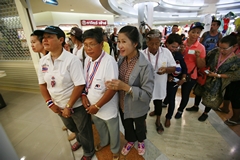 Supporters of the anti-government protest movement line up to cancel their mobile services at an AIS office on Saturday. (AP Photo)

Mr Suthep earlier this week adopted a new strategy targeting businesses he believes are linked to the Shinawatra family, encouraging the protesters to "visit" these firms.

On Thursday, the protesters went to SC Asset Plc, a property developer owned by the Shinawatra family, and SC Park Hotel. That night Mr Suthep put more companies on his boycott list including AIS.

Posts have since proliferated on social media, showing images of other well-known companies alleged to have links to Thaksin or people who support him. Some of the claims tend toward the "urban legend" side of the truth scale.

AIS, Thailand's largest mobile company by subscribers and market capitalisation, was founded 28 years ago by Thaksin, who later set up Shin Corporation as the holding company for his business empire. He sold Shin shares in 2006 to Singapore-based Temasek Group in a high-profile transaction that marked the beginning of his political downward spiral.

According to the latest book closing date on Aug 21, 2013, Shin was the major shareholder of AIS, with 40.45%, followed by Singapore Telecom subsidiary Singtel Strategic Investments Pte Ltd (23.31%), and retail shareholders through Thai NVDR Co Ltd (6.32%).

As for its largest shareholder Shin, the largest shareholder as of the latest share register closing date on Aug 27 last year was the Temasek subsidiary Aspen Holdings Co Ltd (41.62%), followed by retail investors through Thai NVDR (22.93%) and Chase Nominees Limited 28 (0.83%).

Mr Suthep on Friday night expanded his net by asking the protesters to boycott more companies linked to the Shinawatra family including Voice TV, an internet news website and one of the recent digital-TV licence winners.

Aunjit Wongsampan, 65, was among those who were lined up at an AIS shop in Bangkok on Saturday to hand in her SIM card.

"I think the signal is poor and I am changing it because the company is too wealthy," she told Reuters.

When shown the company's text message, she said: "I don't believe them anymore. I have made my choice."

Supporters of the government have denounced the targeting of business when the protests have already taken a toll on the economy, and on tourism in particular.

"What we don't like right now is their involvement in threatening companies on the stock exchange that is not involved with government," said Tida Tawornseth, chairwoman of the red-shirt United Front for Democracy against Dictatorship (UDD).

"It's a move away from government into business."

Shares of AIS (ADVANC) on the Stock Exchange of Thailand closed on Friday at 210 baht, down just 2.3% from the end of the previous week.

Department of Health, PPAT and Bayer Thai reinforce their fight against unplanned pregnancies,

Interpol has issued a red notice for a South Korean cryptocurrency founder who is accused of fraud over the company's $40 billion collapse, prosecutors said Monday.