Red-shirt bosses line up their targets

NAKHON RATCHASIMA: The United Front for Democracy against Dictatorship (UDD) will zero in on the People’s Democratic Reform Committee (PDRC), independent agencies, the judicial system and any plan to use the armed forces for a coup, UDD chairwoman Tida Tawornseth says. 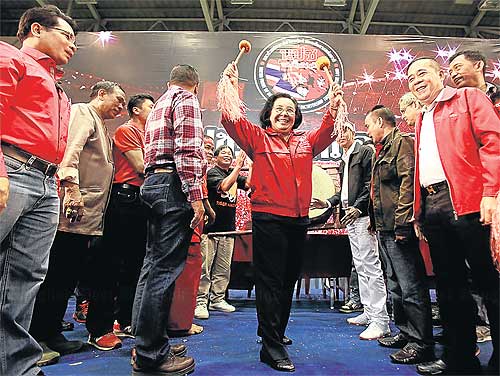 The red-shirt leader announced the plan at the “war drum” meeting in the Chalerm Phra Kiat Sports Stadium in Muang district yesterday.

The meeting was attended by about 4,000 UDD members from around the country.

“Unlike the last meeting when we focused on fighting a coup, we now see the situation has changed. The ammart, or aristocratic elite, are trampling on democracy-loving people. We have to revise our strategies,” Ms Tida said in her opening speech.

She said the UDD previously adhered to a two-prong strategy of working within the House of Representatives and outside of it.

“Since the House is temporarily not functioning, we have to review our strategy. We will have to fight with two main ‘legs’. The red shirts will form one leg and democracy-loving people the other,” Ms Tida said.

The UDD’s four main targets will be the PDRC led by Suthep Thaugsuban, the “fraudulent independent agencies of the aristocratic elite”, the judicial system, which is marred by injustice, and the use of the armed forces for a coup.

She called on UDD leaders to unite and exchange opinions and provide suggestions on ways of advancing the struggle.

“We will continue to fight so that our long struggle will not be in vain. We have been fighting for eight years in a democratic movement. Today, we can’t afford to yield to hooliganism.

‘’We have to try to win the hearts of the non-red shirts. We have to fight with rationale because we don’t want to suffer any more losses. We will fight until victory,” Ms Tida said.

The PDRC’s activities not only put pressure on caretaker Prime Minister Yingluck Shinawatra and her government, but also upset Thais as a whole, she said, adding the UDD believed most people disagree with the PDRC’s movement.

Red-shirt leader Jatuporn Prompan said leaders of UDD provincial chapters reported that many had been upset by the PDRC’s movement over the past four months.

“Mr Suthep’s movement had put pressure on those who disagree with his cause. This rising pressure will only force them to come out and fight,” he said

He said the UDD was considering campaigning to boycott business operators that supported the PDRC movement.

The Department of Special Investigation recently compiled a list of 66 business operators and individuals giving financial support to the anti-government movement.

Red shirts should think of how to get rid of Mr Suthep and those who were standing behind him, Mr Jatuporn said.

“If we, the red shirts, do not come out, this government and democratic rule will be brought down by March,” he said.

Mr Jatuporn said the problem facing the UDD was not only Mr Suthep, but also the network of aristocratic elites - the same group of people behind the Sept 19, 2006 coup and the 2010 political violence.

“From today we will have to fight until victory. We have two choices — to win or get killed. We have to teach Suthep a lesson for challenging the UDD,” he said.

The meeting is working out plans for all red-shirt branches across the country to launch their activities in the same direction and in tandem with its strategy.

In another development, Suporn Attawong, a red-shirt leader, yesterday announced the establishment of the Democracy Protection Volunteers Group in Maha Sarakham.

The group, consisting of members from 20 northeastern provinces, is aimed to “fight against any group of people and individuals whose acts deemed harmful to democratic system in Thailand’’,
said Mr Suporn, who is the leader of the group.

They would hold the first major gathering in Maha Sarakham on March 1.