PDRC leader demands live broadcast and gets it

Laung Pu Buddha Issara has agreed to leave Voice TV after the company broadcast live a ceremony in which its director apologised for offending the monk and farmers. 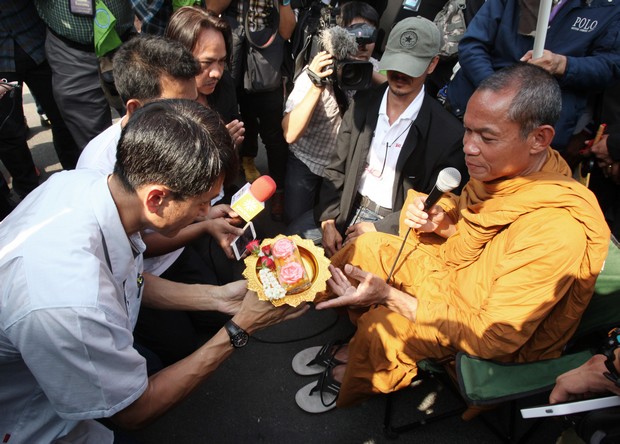 The People's Democratic Reform Committee (PDRC) leader on Monday morning led a group of farmers to the Voice TV office next to the Army Club on Vibhavadi Rangsit Road.

The monk said farmers were unhappy about a commentator's claim that protesting farmers are not real farmers.

On behalf of the station, news director Prateep Kongsit agreed to apologise to the monk and growers by bringing them flowers, incense and candles.

Luang Pu subsequently offered his advice to Mr Prateep, saying that Voice TV has a duty to uphold honest and factual reporting as a member of the media and should not be influenced by the politics of its management.

The farmers then showed rice contracts to demonstrate that they are being affected by rice-pledging payment delays.

Voice TV broadcast the whole apology and interaction with the farmers live.

Satisfied, Luang Pu left late in the afternoon, announcing the trip a success.

Since Monday, PDRC protesters have split off into groups to "visit" businesses linked to the Shinawatras, secretary general Suthep Thaugsuban said on Saturday.

He claimed the family owned 45 companies with total capital of 52 billion baht, with SC Asset Plc, a property developer, generating the most revenue, followed by Rama IX Hospital.

Mr Suthep said the PDRC would exclude the hospital and education businesses, but would force the rest into bankruptcy.