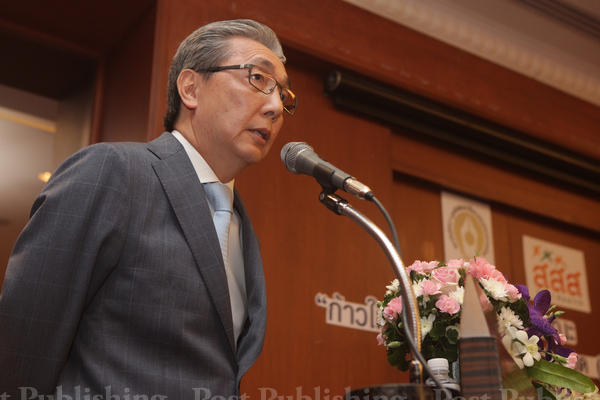 Former deputy prime minister Somkid Jatusripitak offers advice on the political conflict in a keynote speech to a reform forum on Monday. (Photo by Pawat Laopaisarntaksin)

''If we want to see reform move forward, political violence and the situation in which state authorities cannot administer the country must be resolved. It must end quickly and effectively,'' he said in a keynote speech to a reform forum organised by the Isra Institute and the Thai Health Foundation.

The former deputy prime minister warned that the prolonged political crisis is gradually eroding economic growth, exports, consumption and investment, reflected in the latest data from the National Economic and Social Development Board.

The advisory board reported 0.6% economic growth in the fourth quarter of last year compared with 2.7% in the previous three months. International confidence in Thailand will also be damaged because other countries can see no sign of an end to the political deadlock, he added.

''The most important condition for reform is that the political impasse must be quickly resolved,'' he said.

He said a new person with strong leadership, vision and determination is needed to take the country forward and embark on reform, as opposed one who merely follows advice of bureaucrats.

''We don't need a leader who acts only as a subcommittee chairman. Until then reform cannot move forward. We must not fool ourselves,'' he added.