Getting the message out
Thailand
Politics

Getting the message out

Under fire Election Commission is fighting back on air - The protest is getting dirty with graft allegations pitched at Suthep and family - The navy chief’s apparent support for the rallies has landed him in rough waters, but he’s not fazed

The Election Commission (EC) is going on the offensive after being accused of dragging its feet in finishing the drawn-out election of Feb 2. 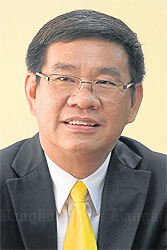 It is also being blamed for impeding rice-pledging payments to farmers by refusing to approve moves to obtain funds. However, the commission has since approved a government request to disburse more than 700 million baht from the central fund.

The EC has decided it won’t take the negative publicity against it lying down. In fact, election commissioner Somchai Srisuttiyakorn, who is in charge of election administration, has offered to assume full supervision of the EC’s public relations after being given the green light from fellow commissioners.

Commencing his new role, Mr Somchai formed a team of "cyber observers" to monitor trends on social networks and hot issues of the day on the internet. Specifically, the team looks out for messages posted about the EC and reports them to the EC board every morning. The team also prepares responses to the messages.

The team started working after Mr Somchai and the EC came under fire from some Facebook users who believe there were deliberate stalling tactics over consideration of the government’s request for rice-pledging payments to farmers.

The remarks have prompted the EC to file a legal complaint against 688 individuals who spread the accusation, which is a crime under the Computer Act.
The EC is also seeking the return from state-run Channel 11 of a time slot previously extended to the commissioner but which has now been taken over by another programme.

The commission is looking to re-launch its "Koh Tid Kor Kor Tor" (Follow the EC) programme to be broadcast live on Saturday morning with a rerun on Wednesday and Friday evenings.

The Saturday morning show takes up the same time slot as the "Prime Minister Yingluck Shinawatra Meets the People" talk programme, which was discontinued when the House was dissolved.

The EC contends it has every reason to "reclaim" its place in the Channel 11 slot as it granted the station a 20-million-baht budget, through the Public Relations Department, to publicise news about elections.

However, Channel 11 now airs a current affairs programme called "Thun Satharnnakarn Ban Muang" (Keeping up with the situation) in the time slot. The programme, hosted by Jom Petpradab, belongs to the News Focus company with alleged connections to the "Dubai boss".

In one of its episodes, the programme carried a political analysis suggesting it may be the EC’s fault that rice-pledging payments to farmers have been delayed.
Mr Somchai has also been invited to speak on the programme. He was informed by the host that the interview would be broadcast live. However, the segment was ordered by a phu yai at the last minute to be put on hold.

The commissioner was told his interview would be recorded instead of being aired live, although when the recorded interview will be put on air remains a mystery. 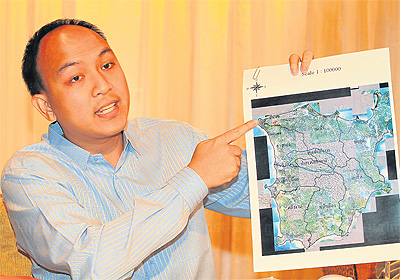 The allegations have spread to target his family, especially his children, who have stood by his side in recent months as the street protests escalate.

The claims against the movement’s leaders, and sometimes their families as well, were floated around the time the bank accounts of the PDRC and its leaders were ordered frozen, and the protest marches led by Mr Suthep to raise awareness and support were ratcheting up. The marches have seen him picking up bundles of cash donations from sympathisers and admirers along the streets.

Tan Thaugsuban, Mr Suthep’s eldest son who takes care of the Thaugsuban family businesses and also serves as his father’s bodyguard at protest sites, was apparently the first to come under attack.

The controversy surrounding Mr Tan concerns a 250-million-baht land deal in Nakhon Si Thammarat that he, along with five other people, arranged with NST Property Group Co.

The Pheu Thai Party has asked the Department of Special Investigation to probe the acquisition of the land, claiming the deal was made around the same time the DSI issued an order to freeze the bank accounts of Mr Suthep and other PDRC members.

The party also claimed that the purchase was suspicious as Mr Tan and his associates bought the land on Jan 29, the same day Mr Suthep urged PDRC members to close down the Nakhon Si Thammarat land office. The DSI picked up the cue, citing Mr Tan’s involvement in the PDRC protests.

Namthip Thaugsuban, Mr Suthep’s youngest daughter who once joined one of Mr Suthep’s city marches and carried a bag containing cash donations, is the latest target of a smear campaign, a PDRC source said.

She has found a photo of herself with friends taken at a ski resort in Japan’s Hokkaido region being shared in the social media with a comment that she was plundering cash donations obtained by the PDRC. The comment also linked Ms Namthip’s trip to Japan to Mr Tan’s land purchase and questioned the protest’s motive.

On the rally stage that night Mr Suthep told protesters that the grenade was thrown by police – a blunder that Mr Akanat later admitted having made and apologised for. He is responsible for receiving and screening information to be passed onto the PDRC leader.

As for Mr Suthep, between the scandalous Sor Por Kor 4-01 land scheme and his repeated postponements to acknowledge charges over the deadly 2010 crackdown on the red shirts, the ex-Democrat secretary-general faces questions involving his private life and his wife’s previous marriage.

Mr Suthep, a veteran politician, says he is prepared to weather the storm as the longer the anti-government campaign rolls on, the more the smears he can expect. He figures attacks on his private life are not worth paying attention to.

Rear Adm Winai Klom-in’s career in the navy may be in danger of hitting the rocks, but he insists he stands by the decisions he makes.

The Naval Special Warfare Command (Seal) chief is under immense pressure after he showed he was sympathetic to the anti-government People’s Democratic Reform Committee (PDRC) movement.

To make matters worse, two members of the Seals were arrested this week by police. They were suspected of working as guards for anti-government protest leaders. 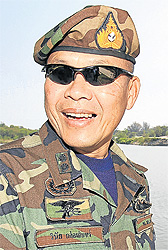 Winai: Choosing between good and evil

The latest arrests came after three navy men were detained in Bangkok on Jan 16, and later three ex-Seals were nabbed. The arrests raised questions about the Seal’s role in the anti-government rally, which has put navy chief Adm Narong Pipattanasai in an awkward situation.

The navy commander-in-chief has launched an inquiry into the two Seal officers caught this week. They could face disciplinary and criminal charges for allegedly carrying firearms in public without reasonable grounds.

He reportedly apologised to the premier for the incident, according to Mr Charupong.

Rear Adm Winai also became the victim of mudslinging after it was alleged he was one of PDRC secretary-general Suthep Thaugsuban’s retainers. The allegations were made and circulated in the social network that he was among Mr Suthep’s personal guards who wore a hood to conceal his identity.

However, checks by authorities confirmed this was untrue.

Rear Adm Winai does not hide his political colours. In fact, he has been photographed wearing a black T-shirt to the PDRC rallies, armed with a whistle. He maintains he has every right to visit the rally as a citizen. He has also received many PDRC members who came to express their moral support for him at the naval base in Sattahip, Chon Buri.

A navy source said the rear admiral has been warned by his superiors about the Seal’s alleged closeness to the PDRC. No disciplinary action is in order given Rear Adm Winai’s seniority.

Rear Adm Winai has been given instructions by the navy chief not to voice his political opinions and to conduct himself in a politically neutral manner.

The navy is also treading a fine line as it must take precautions not to endanger the force’s reputation by being chided for taking sides in the political conflict. While it must uphold neutrality in the face of a knife-edge political situation, it does not wish to upset the protesters, and disciplining a figure the protesters admire could backfire.

Rear Adm Winai appears unfazed by the growing pressure on his unit and himself. He has made it clear he is ready for anything, including expulsion from the navy if it should come to that. He said the consequences, no matter how grave, do not bother him.

'There is no sitting on the fence when it comes to choosing between good and evil," he said.

Kuwait suspends flights to and from Thailand over coronavirus fears

CAIRO: Kuwait's civil aviation authority announced on Monday it had suspended all its flights to and from Thailand, South Korea and Italy after reports of an outbreak of coronavirus in the countries, state news agency KUNA reported, saying this came in accordance with the Kuwaiti Health Ministry instructions.