Bangkok-based Indian businessman Satish Sehgal has appointed representatives to petition His Majesty the King to intervene in his case and prevent him being deported. 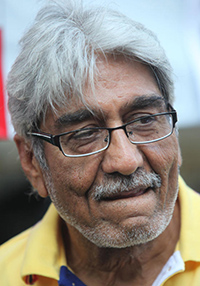 Satish Sehgal has sought to petition His Majesty the King to intervene in his deportation.

The representatives are his lawyer Chup Chairerkchai, and Arthit Sehgal, his younger brother.

The pair will petition His Majesty after Interior Minister Charupong Ruangsuwan signed an order to revoke Mr Sehgal's Thai residency and Centre for Maintaining Peace and Order chief Chalerm Yubamrung signed a deportation order for the businessman.

Now that both orders have been signed, police can arrest Mr Sehgal and deport him.

The president of the India-Thai Business Association is accused of defying the emergency decree imposed by the government in leading People’s Democratic Reform Committee (PDRC) demonstrators to besiege state offices. But he denies breaking the law.

Mr Sehgal said he has appointed two representatives to act on his behalf out of concerns for his safety, adding that he has not been treated with justice.

He also claimed the Interior Ministry has never summoned him to explain himself in relation to the charges lodged against him and said he has not received an official deportation order from the CMPO.

Mr Chup argued that his client had never violated Section 12 (7) of the Immigration Act, which prohibits a foreigner from doing anything deemed detrimental to society. The petition for a Royal intervention would be submitted through the Office of His Majesty's Principal Private Secretary, he said.

His brother added that Mr Sehgal was loyal to the King and had regularly joined activities to show his high esteem for the monarchy.