The Supreme Administrative Court yesterday ruled that the removal of Thawil Pliensri as National Security Council (NSC) secretary in 2011 was unlawful. 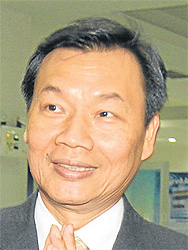 Mr Thawil was shifted from the position under the orders of the prime minister, Yingluck Shinawatra.

Yesterday's ruling stated that Mr Thawil, who currently serves as a prime ministerial adviser, must be reinstated to his former role within 45 days. It comes a little more than six months before Mr Thawil's mandatory retirement in September.

Mr Thawil lodged his initial complaint with the Central Administrative Court in April 2012, accusing Ms Yingluck of unfair treatment after he was transferred from the NSC on Sept 30, 2011.

On May 31 last year, the Administrative Court ruled in favour of Mr Thawil, revoking the prime ministerial order and ordering Mr Thawil's reinstatement.

Appealing against that decision, Ms Yingluck claimed that as head of the government she had the authority to transfer officials to ensure the national administration was in line with the government's policy manifesto.

However, the court ruled yesterday that while the prime minister could exercise her judgement in transferring personnel, there must be plausible reasons to justify her decisions. Transfers should be free from bias or political preferences, the court said.

There are no further avenues of appeal.

Ms Yingluck cited the broad reason "for appropriateness and benefits in national administration" for her transfer of Mr Thawil. She failed to show how the NSC chief failed in his responsibilities, the court said.

In his petition, Mr Thawil suggested his transfer was ordered to allow Pol Gen Priewphan Damapong to become police chief and his predecessor, Pol Gen Wichean Potephosree, to take over Mr Thawil's position at the NSC. Pol Gen Wichean was later transferred to the post of permanent secretary at the Transport Ministry, while Lt Gen Paradorn Pattanatabut took the top NSC posting.

Mr Thawil said yesterday that he had not wanted his job back when he decided to take the case to court. He said he was fighting for justice and transparency for all state officials. The patronage system reflected in his unlawful transfer has "completely destroyed" the country's bureaucratic system, he said. "If the patronage system stays strong, how can civil officials be counted on to do their jobs correctly?"

In a radio interview, Lt Gen Paradorn said yesterday he is ready and willing to comply with the court's ruling. However, he said Mr Thawil will face a hard time when he returns to the NSC.

He noted that Mr Thawil has frequently appeared on the anti-government protest stages, while as NSC chief he will be required to work with the Centre for Maintaining Peace and Order set up to handle the demonstrations. He was also concerned that a change of the NSC leadership would affect peace talks with the far South separatists. Lt Gen Paradorn heads the government's negotiation team.