Issara refuses to turn himself in
Thailand
Politics

Issara refuses to turn himself in

Suspect wants to 'finish the rally' before fighting murder charge

Key anti-government protest leader Issara Somchai yesterday refused to surrender to police on attempted murder charges, vowing to fight the allegations only after the rallies end. 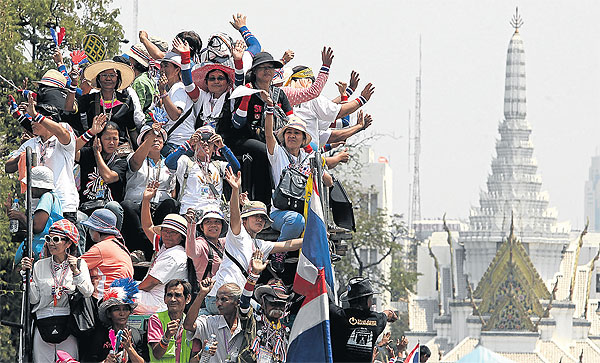 taking the pledge: Women from the People’s Democratic Reform Committee travel to the Temple of the Emerald Buddha to swear to be good citizens on International Women’s Day yesterday.

Mr Issara said he would not turn himself in to investigators even though Chachoengsao provincial court issued arrest warrants for him and five People’s Democratic Reform Committee security guards on Friday.

“Let me finish the rally first and then I will fight the case,” the former Democrat Party MP for Ubon Ratchathani said.

The six men are accused of abducting Yuem Nillar, a supporter of the red-shirt United Front for Democracy Against Dictatorship, on Feb 24.

Mr Yuem told police he was held for five days and severely beaten before being tied up and thrown into the Bang Pakong River.

The victim claimed he could identify Mr Issara as the mastermind.

The 33-year-old security guard is still recovering from his injuries in Police General Hospital in Bangkok. Doctors said he was having breathing difficulties because his lung was lacerated from the impact of a solid object.

Mr Issara denied the accusations and claimed the case was politically motivated.

“The arrest warrant has been issued without me being informed to defend the charges. I should have been summoned to hear the charges first,” he said.

The protest leader challenged investigators to name and investigate the five guards accused of being his accomplices in trying to murder the red-shirt supporter.

The PDRC has repeatedly insisted its movement is non-violent, but a number of cases of abuse by people acting on its behalf have been widely documented.

The latest violence took place about 2am yesterday when unidentified gunmen fired shots at the Chaeng Watthana rally site led by monk Luang Pu Buddha Issara. No one was injured.

Police later stopped a sedan driving past the site for a search and discovered a home-made bomb. The car belongs to 34-year-old office worker Marut Channual, Explosive Ordnance Disposal chief Kamthorn Auicharoen said. The man was taken in for questioning.

A separate shooting attack was reported at Mongkutwattana Hospital, near the Chaeng Watthana rally site, about 8pm on Friday, about the same time a grenade was launched at Shinawatra Building on Vibhavadi Rangsit road where a group of PDRC protesters was rallying.

Mongkutwattana Hospital director Liangthong Naenna confirmed shots had been fired at the building, saying the bullets had damaged the external part of the seventh floor where the surgery division is situated.

Dr Liangthong condemned the attack, saying the use of violence at a hospital was unacceptable.

He suspected that the attack stemmed from the fact that the hospital had treated PDRC protesters from the Chaeng Watthana rally site.

The manufacturing production index in June rose for a fourth straight month, up 17.58% from a year earlier, boosted by higher production of autos, electronics and steel, the industry ministry said on Friday.