Prime Minister Yingluck Shinawatra sits with other officials in a mockup of a high-speed train carriage at Khon Kaen University, before explaining the 2-trillion baht loan plan in October 2013

The Constitution Court on Wednesday ruled unanimously the government's legislative bill to empower the Finance Ministry to seek two trillion baht in loans for infrastructure development projects is unconstitutional. 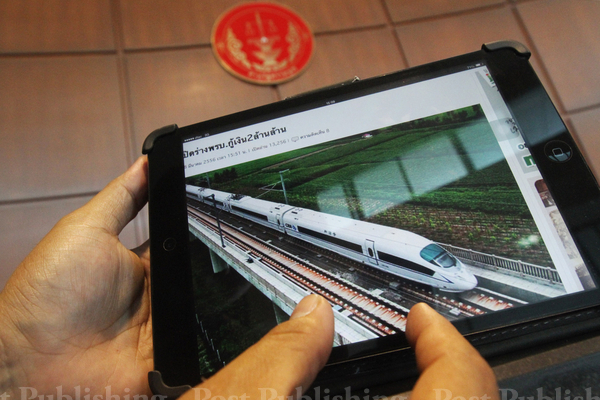 The promotion for the government's high-speed train project under the borrowing bill, which was ruled unconstitutional by the Constitution Court on Wednesday, displayed on a reporter's tablet screen. (Post Today photo)

The court also agreed by majority vote that the legislative procedures had violated the charter's provisions.

The judgement was made following a request that the court decide if the bill contravened Sections 160 and 170 of the constitution.

The challenge was filed by Democrat Party MPs through the House Speaker immediately after the Senate passed the bill in its final reading in November last year. They alleged it lacked details and accountability.

The court unanimously agreed by a vote of 8-0 that the content of the bill violated provisions set down in  Section 169 of the charter. It also voted 6-2 that the bill's legislative procedures contravened Section 170 of the constitution.

Charter court secretary Chaovana Traimat announced the judgement, and said the legislation was voided by the ruling.

The bill was introduced by the Pheu Thai Party with the explanation it was planned to use the money to make overdue improvements to infrastructure. It largely focused on massive spending on the construction of high-speed train lines to Chiang Mai, Rayong, Nong Khai and Padang Besar, on the Malaysian border, by building them in stages.

The court's ruling followed a desperate plea from caretaker Prime Minister Yingluck Shinawatra and caretaker Transport Minister Chadchat Sittipunt that it was important to boost the competitiveness of the country's transport sector, given the approaching launch of the Asean economic community at the end of 2015 .

The prime minister's Pheu Thai Party dubbed the legislation a plan to shape the future of the country.

The Democrats and other critics opposed it mainly due to the nature of the bill. They argued that, unlike the annual  budget bill which must be passed by parliament, it would bypass scrutiny and inevitably lead to  massive corruption.

There was no situation requiring that the Pheu Thai-led government pass such a financial bill, normally reserved for emergency issues. The projects should be funded by the normal budgetary process.

''This certainly is not an emergency case, as the government has claimed. The government told the public a lie,''  Atavit Suwannapakdee, a co-leader of the People's Democratic Reform Committee (PDRC) and former Democrat MP for Bangkok, told FM101 news programme on Wednesday.

The normal annual budget bill is subject to tight regulations on procurement, but the infrastructure bill forced through by the government would involve special procurement methods.

''The government intended to avoid normal procurement procedures,'' said Mr Atavit, who was a member of the  House committee that scrutinised the bill before the House was dissolved.

He said the voting procedure was illegal as at least one Pheu Thai MP at the time voted on behalf of  colleagues who were not present on the floor, using their cards, to help push the bill through. The voting violation was videod by the Democrats and presented as evidence to the court.

The bill has also been a target of the PDRC.

Mr Atavit said the voided legislation's priorities were wrong. It should have concentrated on building dual tracks first, before the high-speed train project, as anti-government leaders have argued.

Ms Yingluck, who left Bangkok on Wednesday morning on a four-day tour of provinces in the Northeast and North, did not comment on the bill after the judgement.

Caretaker PM's Office Minister Varathep Rattanakorn said on Tuesday that the government did not have to show accountability if the court ruled against the bill. The responsibility belonged with the lawmakers who supported it.

Mr Atavit, however, argued that the bill was initiated by members of Pheu Thai, the lead party in the coalition, and executed by the government of the time.