Cabinet ministers and agencies will be assigned to study the Constitution Court's voiding of the bill which sought to empower the Finance Ministry to borrow up to 2 trillion baht for infrastructure development, mainly the high-speed train, and then decide what to do next, caretaker Prime Minister Yingluck Shinawatra said in Khon Kaen on Thursday. 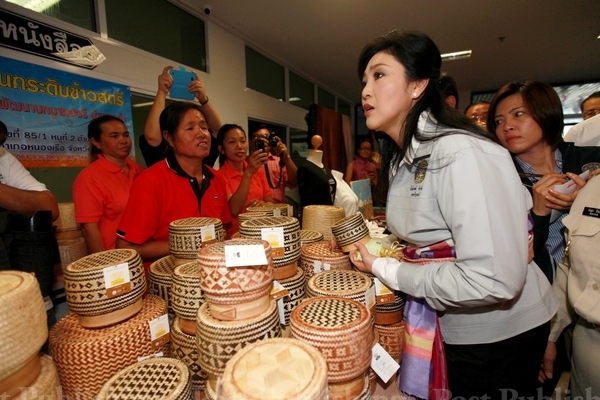 Yingluck Shinawatra visits an Otop exhibition at the provincial hall in Khon Kaen on Thursday. The caretaker prime minister is in the province to chair a meeting to combat drought. (Photo by Chanat Katanyu)

She was responding to questions about Democrat Party member Wirat Kalayasiri's plan to gather up to 20,000 names to file a petition with the National Anti-Corruption Commission (NACC) for the impeachment of the prime minister and the entire caretaker cabinet after the Consitution Court ruled that the bill and its procedures were unconstitutional.

Ms Yingluck said the government has not yet received the Constitution Court's official ruling.

On receiving the ruling, Deputy Prime Minister Pongthep Thepkanchana, PM's Office Minister Varathep Rattanakorn, the Council of State and other legal officials would be assigned to look into it. She said the government was ready to comply with it.

Asked whether she thought the government had been denied justice, especially by independent agencies, Ms Yingluck said she respected the law but did not want to see the law or agencies in the justice system being used as a tool to get an answer to every question.

She asked for unity so that everyone in society can stand together, despite differences of opinion.

Politics should be a tool to forge unity and co-existence, with proper checks and balance mechanisms, she said.

Asked why anti-government groups hated the Shinawatra family, a tearful Ms Yingluck retorted: "Will you not let Thai people live together anymore?  Can you say a certain family must not exisit in Thailand?  Are you people now like this?  These are my questions."

In Khon Kaen, the prime minister chaired a meeting of provincial officials on measures to combat drought.