Group of 6 peace bid shot down

Anti-government protest leader Suthep Thaugsuban reads out a letter sent to give him support to anti-government demonstrators at the Lumpini stage. 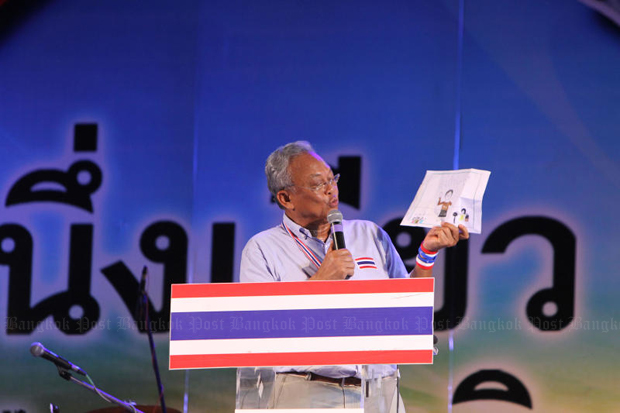 Anti-government protest leader Suthep Thaugsuban reads out a letter sent to give him support to anti-government demonstrators at the Lumpini stage. (Photo by Pornprom Sarttarbhaya)

The government, meanwhile, reiterated that the framework for any negotiations must be in line with the constitution.

The six independent organisations on Monday proposed that the caretaker government and the People’s Democratic Reform Committee (PDRC) each present a list of 10 people to mediate in the negotiations, which would then be narrowed down to five.

The proposal was announced at the Office of the Ombudsman after representatives of the six independent bodies met to review their proposals for reconciliation.

Previously, the six bodies had tried to jointly propose solutions to the political impasse and offered to broker peace talks between the government and the PDRC.

They were expected to outline their peace plans, but had to change tack and come up with a new approach after the government and the PDRC poured cold water on their proposals.

They agreed the situation has now changed and neutral people who will broker peace talks must be acceptable to all involved in the political conflict, Mr Somchai said.

He said the independent bodies have decided they will write to ask caretaker Premier Yingluck Shinawatra and PDRC secretary-general Suthep Thaugsuban to each send in lists.

Mr Somchai said the organisations will look at the lists to see if the neutral people named by the two sides match and how many of them there are.

If there are at least five neutral people who are named by both sides, they will be tasked with outlining the roadmap and framework for negotiations. They may either follow the proposals of the six independent bodies or come up with their own ones, Mr Somchai said.

The process to find five neutral people may take a month. There may be several attempts to find them before at least five people can be named, he said.

Mr Somchai stressed that when a panel of neutral people brokers peace talks it must work transparently and be open to public scrutiny. They must not reach any compromise benefiting the two conflicting sides at the expense of the public interest.

Ms Yingluck was quoted as telling her close aides that the government will not make any nominations first but will wait and see what the PDRC has to say.

Mr Suthep responded to the prime minister on the Lumpini rally stage last night, saying: “I would like to tell Yingluck not to wait for me. I won’t propose any names,” he said.

“With respect to the independent agencies, it’s not that I don’t want to cooperate but I don’t believe it would be possible to find a mediator between Yingluck’s side and ours. The reality is that Yingluck and Thaksin [Shinawatra, ousted prime minister] are desperate to hold on to power and want to maintain their grip on Thailand.

“They will fight using all means, no matter lawful or unlawful,” he said.

Meanwhile, caretaker PM’s Office Minister Varathep Rattanakorn yesterday welcomed the proposal of the six bodies but warned the terms for the negotiations were far more important than who the mediator is.

“If the terms of negotiations are not in accordance with the constitution, the talks will not accomplish their goal. The government would not do things that are not consistent with the charter,” he said.

Gen Ekkachai Sriwilas, director of the King Prajadhipok Institute’s Office of Peace and Governance, said he did not believe the roadmap for peace proposed earlier by the independent bodies would be successful.

He said some of the independent bodies appear to be in conflict with the government themselves such as the EC, the Office of the Ombudsman or the NACC.

Gen Ekkachai said independent bodies must avoid acting as if they are in conflict with the government so that the peace talks can proceed.