Study: One rape every 15 minutes

More than 31,000 girls and women were raped in Thailand last year and about 60% of them were university students and school pupils, while alcohol use is a major contributing factor to sexual assault, academics said on Thursday.

According to the Public Health Ministry, there were 31,866 rape cases last year, or 87 cases per day on average, or one victim every 15 minutes, Supensri Puengkhokesoong, a leading member of the Women and Men Progressive Movement Foundation (WMP), said at a forum on sexual violence in Thailand. The event was organised by the government's Social Development and Welfare Department, the Thai Health Promotion Foundation and the WMP.

"Most of the women and girls were exploited by people who they were close to and trusted," Ms Supensri said.

In many cases, the rapists were educated and they were able to take advantage of their victims because the victims owed them money. According to some of the women, they were tricked or blackmailed into such acts, she said. 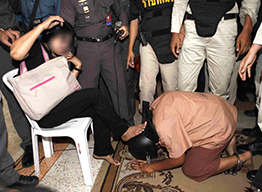 A woman kicks a 23-year-old man as he asks for her forgiveness for raping and killing her daughter last year. (Photo by Surapol Promsaka na Sakolnakorn

Last year, a 17-year-old teenager was raped and the incident was recorded with a mobile phone camera by one of her friends. The video clip was used to blackmail her. Also, a seven-year-old-girl was raped by a seven-year-old boy, and a pregnant woman was sexually assaulted, she said, offering several examples.

"The main problem is that the current system usually defends the suspects and they cannot be prosecuted. Many cases tend to progress slowly and both sides have to eventually compromise.

"Some agencies lack a proper system to help and support the assaulted women and girls, and there are budget constraints and other limitations.

"When an injured woman went to a police station for help, the officers just told her to wait because the situation in the country is not normal at this time," Ms Supensri said.

WMP member Jaree Srisawat said a total of 169 news reports relating to sexual violence were gathered from five popular Thai-language newspapers last year - 51.5% of the news reports were about rape, 17.1% were about sexual abuse, 13.6% were about attempted rape and 7.1% were about gang-rape. Other reports dealt with prostitution and same-sex abuse, Ms Jaree said.

Ms Jaree said the youngest victim was a one-year-old girl and the oldest was 85 years old.