A suspected shooter at Laksi intersection on the eve of the Feb 2 poll, dubbed “the popcorn gunman”, told police he was given an M16 assault rifle from a chief guard of an anti-government group and was paid 300 baht a day to provide security for demonstrators. 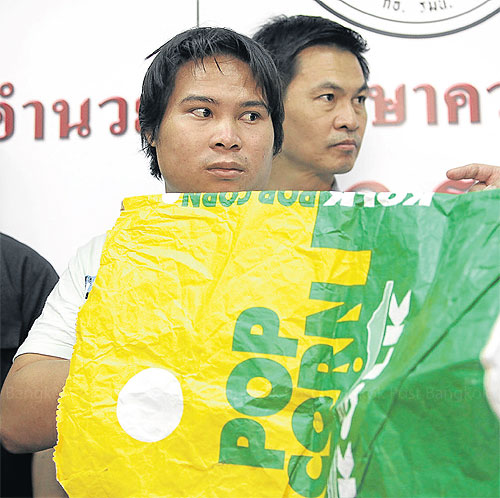 Alleged ‘popcorn’ gunman Vivat Yodprasit is taken before the media at the Narcotics Suppression Bureau yesterday. The suspect, who confessed to having worked as a security guard for the anti-government People’s Democratic Reform Committee, was arrested in Surat Thani’s Muang district on Wednesday. Tawatchai Kemgumnerd

Vivat Yodprasit, 24, a native of Phitsanulok was brought before the media at the Narcotics Suppression Bureau yesterday. He has admitted to being the "popcorn gunman", so called because he concealed his weapon in a large popcorn sack.

He was brought to the conference by caretaker Labour Minister and Centre for the Administration of Peace and Order (Capo) director Chalerm Yubamrung and Pol Lt Gen Winai Thongsong, an assistant police chief.

The suspect was arrested at Wat Pattanaram in Muang district of Surat Thani on Wednesday after he fled the arrest warrant for his involvement in the Laksi shooting on Feb 1.

Mr Vivat admitted he joined the anti-government People's Democratic Reform Committee (PDRC). He said he worked as a security guard for the PDRC in exchange for a daily wage of 300 baht. He worked under a man identified only as "Men", chief of the PDRC's guard team at the Chaeng Watthana rally site.

Mr Men's guard team was named "Phra Ong Dam" (Black Prince), one of the five PDRC guard teams, Mr Vivat said. "The gun that I used at the Laksi shooting was an M16 and I received it from Mr Men, chief of the PDRC guard team at the Chaeng Watthana rally site,'' he said.

He denied any knowledge of how Mr Men acquired the war weapon. He said Mr Men gave him the gun hidden in a popcorn bag on the day of the clashes.

"I fired at least 20 rounds on that day,'' Mr Vivat said. The popcorn bag was used to conceal the M16 and to collect spent bullet shells, he added.

He insisted he had never received firearms training. After the Laksi incident, he remained at the Chaeng Watthana rally site. A few days later, Mr Men took him to Surat Thani's Muang district, where he hid at the house of Mr Men's wife.

Pol Lt Gen Winai said the police were able to arrest Mr Vivat after gathering photos of him from reporters and social media networks. Investigators found acquaintances of the suspect who confirmed his identify before they finally tracked him down.

Pol Lt Gen Winai said police would extend the probe to learn the origin of the M16 used by the suspect and to arrest three more suspects involved in the Laksi shooting. Police denied any bail request for Mr Vivat, who has been charged with attempted murder, carrying a gun and ammunition in public without permission, and violation of the emergency decree.

Police said Mr Vivat has a criminal record and an arrest warrant was out for him in connection with a drug case in Phitsanulok's Nakhon Thai district.

Police yesterday took Mr Vivat to the Criminal Court to seek court approval to detain him. The suspect was greeted with a barrage of jeers from relatives of inmates when he arrived at the court. Many relatives snapped photos of him and shouted, "Fight, fight, popcorn gunman".

PDRC spokesman Ekanat Prompan lashed out at police, saying Mr Vivat's arrest was in contrast to police making no progress in arresting those involved in attacks on PDRC demonstrators at Ratchaprasong and Trat rally venues.

TOKYO: No alcohol, no hugs, no cheers and no autographs: Tokyo Olympic organisers unveiled tough new rules for spectators at the pandemic Games on Wednesday, as they marked one month until the opening ceremony.

SONGKHLA: An articulated truck loaded with containers plunged from a bridge onto a road below and exploded in flames in Hat Yai district late on Tuesday night.