The Constitution Court on Friday ruled by a 6-3 vote that the Feb 2 general election was not lawful.

According to the charter court, the poll breached the law because it was not completed in one day. Twenty-eight constituencies of 375 nationwide were unable to hold voting because no candidates were registered amid anti-government protests. Under the law, a general election must be held on a single day nationwide.

"The 2013 royal decree on the House of Representatives dissolution stated that the general election must be held on Feb 2, 2014. But on that date, no election was held in 28 constituencies," the court said in a statement.

"Re-elections for the 28 constituencies after Feb 2 are therefore impossible because it would mean the elections were not held on the same date throughout the kingdom."

The Constitution Court hearing was held at the request of the Office of the Ombudsman following a complaint lodged by Kittipong Kamolthammawong, a law lecturer at Thammasat University. 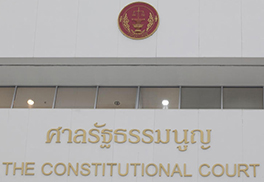 The charter court says the Feb 2 poll is void. (Photo by Pattarachai Prechapanich)

Mr Kittipong argued that the absence of voting in 28 constituencies meant that the Feb 2 poll breached the charter.

The ruling Pheu Thai Party ran effectively unchallenged for the other seats amid a boycott by the opposition.

On Thursday, Democrat spokesman Chavanond Intarakomalaysut said the Democrats may boycott a fresh election even if the charter court invalidates the Feb 2 poll.

The Democrats want national reform to take place before a general election and the party is not worried it might face dissolution if it steers clear of an election for a second time, Mr Chavanond said.

His comments came after prime minister's secretary-general Suranand Vejjajiva urged the Democrats to contest a fresh poll if the Constitution Court today ruled against the Feb 2 election.

Mr Suranand said the Democrats should consider returning to the race, saying their boycott of the Feb 2 poll was to blame for the political turmoil.

The court meanwhile dismissed the EC's request for it to decide whether the agency has the authority to proceed with election re-runs, since the Feb 2 poll has been nullified.

The court based its ruling to void the poll on paragraph 2, section 108 of the charter.

"The dissolution of the House of Representatives shall be made in the form of a royal decree," the charter says. "The day for a new general election must be fixed for not less than 45 days but not more than 60 days as from the day the House has been dissolved and such election day must be the same throughout the kingdom."