The Election Commission (EC) has signalled that a fresh election could be several months away after the Constitution Court yesterday ruled to nullify the Feb 2 poll results. 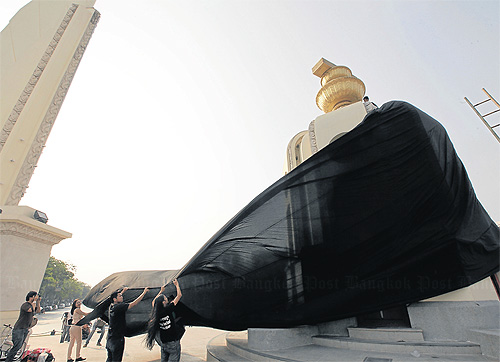 EC member Somchai Srisuttiyakorn said there are two possible options for staging a new general election and the commission will debate them after studying the court ruling.

"The first option is that the EC and the government work together and set a new election date within 60 days," he said.

"The other is that the EC and all political parties work out the election date, which doesn't have to be within a 60-day time frame."

Mr Somchai said the two possible scenarios are based on the charter court's 2006 ruling which nullified that year's general election and asked the EC and political parties to work out a new poll date.

He said even though the 2006 ruling stated that a fresh election should be organised within 60 days, a meeting of political party leaders agreed to delay the poll.

A royal decree was eventually issued for the election to be held on Oct 15, 2006, but it was derailed by a military coup on Sept 16.

EC chairman Supachai Somcharoen said the commission would meet on Monday to discuss the best course of action.

"The commission will study the ruling in detail and see if the court has any instructions like it did in the 2006 ruling," he said.

Mr Supachai said all political parties should have a say in the matter, but noted the EC would have to take into account the political situation to ensure tax money would not be wasted.

"We don't know when things will return to normal. It may take at least three months," he said.

He added that the court's ruling means preparations for poll re-runs scheduled on April 5 and April 26 would be scrapped.

The Pheu Thai Party yesterday issued a statement voicing opposition to the court's ruling, claiming a conspiracy against the government.

The ruling party insisted the constitution does not authorise the Office of the Ombudsman to forward a complaint to the charter court, nor does it give the court authority to accept the complaint.

The party said the election was declared void because of disruptions by "a minority of people" and this would set a dangerous precedent for future polls.

The party said several charter court judges were on the drafting panel for the current constitution and have often made life difficult for politicians and political parties, noting the dissolutions of the Thai Rak Thai Party and the People's Power Party.

United Front for Democracy Against Dictatorship chairman Jatuporn Prompan yesterday took a veiled swipe at the court, suggesting it should also have come up with ideas on how to hold fresh polls without disruptions.

He said the government must respect the court's ruling and try to find ways to bring the country back to normalcy.

Both sides should hold talks to consider what could be done to ease the political conflict before a fresh poll is held, he said.

He also said the EC and the government should not rush to hold a fresh poll too soon. They should take advantage of this opportunity to ensure the best solution to the political problem, and should discuss how to hold an election that is lawful and acceptable to all sides, he said.

PDRC spokesman Akanat Promphan said the ruling offers a good opportunity for all sides to take part in national reform.

He said the PDRC will stick to its demand that reform must precede the election, with election law to be changed first to ensure a free and fair poll.

The commissioners insisted the EC had properly followed the law in its efforts to stage the Feb 2 election and could not be held accountable for the poll's failure.

"The EC held a meeting with the prime minister and warned her about this. The government insisted on going ahead with the election, so it must take responsibility," Mr Somchai said.

After the court ruling yesterday, Mr Somchai took to his Facebook page to criticise the caretaker government, saying it must be held responsible for the the 3.8 billion baht wasted in holding the Feb 2 poll.

The government insisted on holding the poll despite the EC's warning it was plagued with problems and that it risked being voided by the charter court, he wrote.

He wrote that the poll's failure was the result of disruptions by protesters, not the EC's decision to hold it.

Mr Somchai added that the EC is awaiting a letter from the charter court to confirm the ruling. The letter is expected to arrive on Monday.

The Constitution Court yesterday ruled by a 6-3 vote that the Feb 2 general election was unconstitutional.

The court was ruling on a complaint lodged by Kittipong Kamolthammawong, a law lecturer at Thammasat University, via the Office of the Ombudsman. It decided the poll violated Section 108 of the charter because it was not completed in one day.

The court based its ruling on Paragraph 2 of the section, which stipulates a general election must be held on a single day nationwide.

Voting could not take place on Feb 2 in 28 constituencies in eight southern provinces because no candidates were registered due to disruptions by anti-government protesters.

The court also said any plans to hold elections in the 28 constituencies after the Feb 2 date were prohibited. If such polls had been held, it would have violated the one-day stipulation, it said.

The court meanwhile dismissed the EC's request for it to decide whether the agency has the authority to proceed with election re-runs. The request was redundant now the Feb 2 poll has been voided, it said.