Red shirts yesterday blocked the office of the National Anti-Corruption Commission (NACC) to protest against the anti-graft panel’s decision to charge caretaker Prime Minister Yingluck Shinawatra in relation to the rice-pledging scheme.

They vowed to continue their blockade until March 31, the deadline for Ms Yingluck to give her defence over the scheme.

Sornrak Malaithong, leader of the People’s Radio for Democracy Group (PRDG), yesterday led about 50 red-shirt demonstrators who had gathered at Sanambinnam intersection in Nonthaburi to the NACC office. They travelled on a six-wheel truck and a pickup truck equipped with loud speakers.

The group’s leaders asked demonstrators to form a line to confront riot police, numbering about 150, and they used both vehicles to destroy police barricades leading to the NACC office.

The PRDG arrived at the NACC office about 11.30am, forcing anti-government People’s Democratic Reform Committee (PDRC) demonstrators, who were there to give moral support to the anti-graft members, to leave.

PRDG leaders criticised the NACC panel for making little progress in its probes into corruption in the construction of 396 police stations and the controversial sale of assets seized after the 1997 economic crisis. The police station scandal and the sale of the assets by the Financial Sector Restructuring Authority took place under the previous Democrat-led government.

The NACC earlier said Ms Yingluck, as chairwoman of the National Rice Policy Committee, was negligent as she failed to stop the rice scheme, despite the fact she knew it was plagued with losses and corruption.

Once Mr Sornrak’s group had managed to seize the area where the PDRC demonstrators were camped, officials immediately left. Only police and soldiers were left guarding the NACC compound. 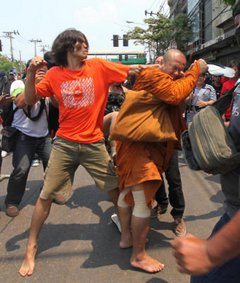 Meanwhile, a monk was assaulted by some PRDG members who mistook him for an anti-government member.

Phra Prat Supavirut of a temple in Kalasin, said Monday he was attacked shortly after leaving Soi Nonthaburi 48, where he attended a funeral rite at his relative’s house.

Suddenly, a group of PRDG members attacked him, said the monk, who fled to safety in a shop in the area. Police rushed to help him. Police are investigating.