53 parties want quick vote as Yingluck vows to stay on

Fifty-three political parties, with the notable exception of the main opposition Democrat Party, have called for a fresh election to be held as soon as possible to break the country's political deadlock.

The party leaders and representatives have called on the Election Commission (EC) to meet with the caretaker government next week to discuss new poll preparations.

They made the announcement after meeting on Friday at the Royal Police Cadet Academy in Sam Phran, Nakhon Pathom. 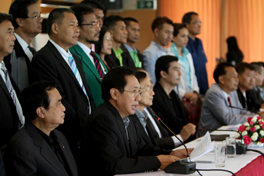 Leaders and representatives of the 53 parties meet on Friday. They want a fresh election to be held soon. (Photo by Apichart Jinakul)

Pokin Polakul, a legal expert of the governing Pheu Thai Party, said after the meeting that all 53 parties agreed the new election should be held as quickly as possible.

"We've resolved that the general election should be held within 45 to 60 days from the date that the Constitutional Court's ruling (that the royal decree for the Feb 2 poll was unconstitutional) is published in the Royal Gazette," Mr Pokin said.

He said participants wanted the government, the EC and all parties to jointly discuss the details and that an amendment to that effect should be added to the royal decree.

As for the Feb 2 poll, all sides have to discuss what to do about the incurred expenses, both by the EC in holding the election and by candidates or parties in their campaigns.

The EC had a budget of 3.8 billion baht for the election, which would have failed in any case to produce enough members to convene a sitting of the House of Representatives. Polling could not take place in 28 constituencies where candidate registration was blocked by anti-government protesters.

Another issue is the the prosecution of people who disrupted the election, said Mr Pokin. They need to know what the EC intends to do with them in order to deter such acts in future. 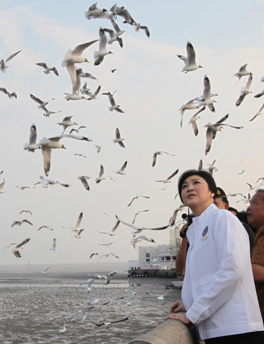 Yingluck: I won't take a break. (Photo by Pattanapong Hirunard)

The former House speaker also noted that, based on the court's ruling, the House dissolution was still in effect and the mandate of the caretaker government is limited.

But it is not clear whether parties, as well as their candidates and members, are still in pre-election mode since there is no royal decree. As a result, it's unclear whether they are bound by pre-election rules.

What needs to be done in the future, Mr Pokin said, is to make sure the EC can hold elections in all constituencies without disruptions.

Meanwhile, caretaker Prime Minister Yingluck Shinawatra has dismissed rumours that her family will take a year-long break from politics.

Asked whether she planned to take a break, Ms Yingluck said, "I haven't given it a thought and I haven't talked about it with the Shinawatra family.

"My thoughts are on what should be done following the Constitutional Court's ruling against the Feb 2 election and how to get all sides to allow a fresh election to take place.

"I hope the Democrat Party will abide by democratic principles and cooperate with the Election Commission," said Ms Yingluck, still in a wheelchair after injuring her ankle nearly two weeks ago.

When reporters asked her whether Thailand would move ahead more easily if the Shinawatra family stayed out of politics for a while, she said she would do anything to ensure the country moves forward, but it must be within the democratic framework.

Asked if Pheu Thai would follow the Democrat Party's example if it decides not to contest the next general election, she said the decision would rest with the Pheu Thai executive.

Ms Yingluck issued a royal decree to dissolve the House on Dec 9. The same decree also stipulated that a new election be held on Feb 2.

On March 21, the court ruled unconstitutional the part of the decree pertaining to the election but kept the House dissolution part intact.